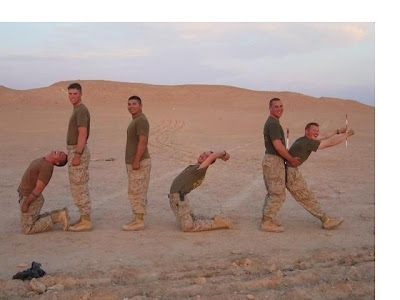 Don't ask, don't tell just got repealed in the Senate!

The whole issue got me thinking about gayness in world military history.


Most of the 'don't ask, don't tell' argument stems from some right wing existential fear that your ability to pull the trigger gets compromised by what you like to do with other people when you're naked. That's the crux of the issue right there. In the US, conservatives run with the idea that gays in the military weaken it based on two assumptions:
A) Gays can't fight.

B) Gays weaken a unit by spreading their gayness amongst otherwise non gay troops (the communicable disease theory of gayness).


I always find argument B particularly funny.  You'd have to be borderline bent already to think that too much exposure to the gay might tip you over the edge into fully fledged homo. That's not exactly something that's going to happen to the average soldier who loves female tits and ass. Sorry, but seeing penis in 'Sexy Harlots 15' didn't ever make me want to fuck the guy in that movie. The stunt dick was only ever there so I could pretend it was mine as I watched it going into the girl.
Anyway, both arguments are run of the mill homophobia but they got me thinking about gayness in armies of the past. And when I say gayness, I'm not talking about a platoon of  flaming Elton Johns waving pink AKs. That kind of effeminate gayness is not the kind of gay that wants to be a soldier. To want to be a soldier in any age and seek out combat you've got to be hard as fuck and I'm not talking in your dick. I'm talking in your head. What you do for fun naked has got nothing to do with it.

Any history of warrior gayness must start with the Greeks I suppose.


Most especially the Thebans and their 'Sacred Band of Thebes'. They were an elite force of 300 warriors who just happened to like boning each other. These guys were as queer as anything you'd see in a San Franciscan assless leather pants bar today and yet were total badass fighters. They fought in pairs, side by side with their lovers on the idea that if one of them died in battle, the other guy is going to be seriously pissed off and rage more on the enemy. It worked and the sacred band played a crucial role in winning at Leuctra. (Not the most famous Greek city state battle I admit, but their skeletons were found in 1890 and some stone monument to them does exist today). Funnily enough, the sacred band were finally defeated by Alexander, perhaps the greatest gay warrior in history.
The Spartans too had a culture of militarized homosexuality. You know those badass few that stayed behind to die at Thermopylae? All of them would have set your gaydar meter blaring. But they conveniently left that bit out of the Greek history movies and standard history books, omitting the scene in the second act where the warriors all go back to a tent after a hard days fighting for a sausage party. Fucking Hollywood and their historical details right? The Spartans were so gay that Herodotus mentions a Spartan wedding night, where the new bride has to dress up like a man so as to make the transition to pussy easier for her husband.
That's pretty fucking gay.


The Spartan's whole culture was a military industrial complex much like the US today. And they proved that there's nothing about what you do with your dick that limits your ability to kill people.
The Romans didn't have a problem with gayness either. But they did believe in a type of manliness where pleasure seeking began to be seen as weakness. That's where the whole idea of gayness being bad in armies probably originates. The idea that sexual pleasure and killing should be kept separate. They are, after all, two diametrically opposed poles on a single magnet. The idea that they repel seems reasonable. But it's hard to reconcile with ancient historical fact.  Caesar himself may have banged his adopted son Octavian who was later to become Rome's first emperor, Augustus. Historians will argue but the point is, two of the greatest military leaders of the ancient world, Alexander and Caesar, were both benders.
That alone should wipe out the "don't ask, don't tell' argument, right?

Conservatives will most likely argue that 'the past is a foreign country, they do things differently there', that ancient history has no bearing on today. So I'll be forced to come up with more recent examples of warrior gayness to prove my point. Okay, no problem. There's plenty of gay to go around.
Let's break out the Revolutionary War.

One of my favourite people from that period was Friedrich Wilhelm von Steuben who was totally queer. And  also a damn fine military leader and tactician. Without him, Washington's army would have been a useless band of peasants taking pot shots at the British from barn roofs. He was a Prussian, probably my favourite militarized society in post Renaissance Europe. Those guys were the solid, spit and polish, shine your musket, help me up after the cannon ball blew my leg off badass military of the 18th century. Any country that can produce a Clauswitz is serious business. But Von Steuben got kicked out of the Prussian army because he liked the cock. So he went to America in search of freedom. Don't you miss that, when America and freedom went together in the same sentence without any cognitive dissonance?
Perhaps my favourite gay military leader is T E Lawrence who led the Arab revolt against the Turks in 1916.  Of course, Lawrence kept his sexual preference on the down low, him being an officer in the post Victorian British Army tasked with holding together a disintegrating empire (any parallel with today's US is purely coincidental) and even the movie they made about Lawrence only passingly alludes to his gayness. And that's just fine by me. Nothing about a man is truly revealed by how he has sex. Especially a soldier. Anyone with the balls enough to risk their life in a combat zone has already gained my respect and what they do with their genitals is surely nobody's business but their own.
It's just a pity there are no honest to goodness wars for them to fight in anymore.