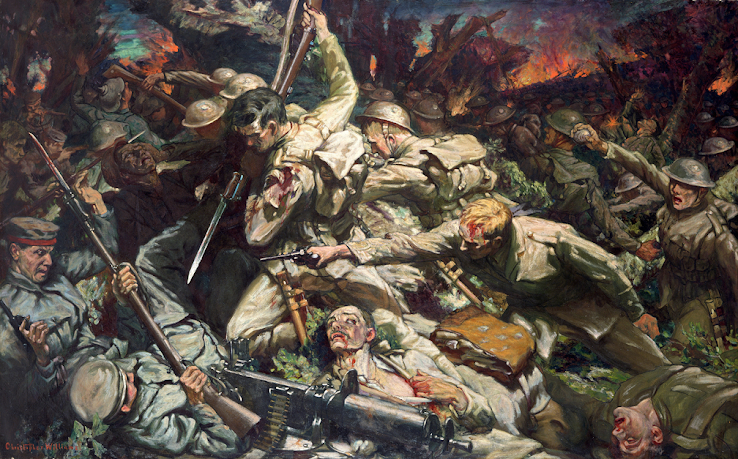 Who ever said war was a truthful environment?

That old aphorism of "truth being the first casualty of war" seems quaint in the modern-day environment post WWII. If only they could have imagined it back in 1943. Modern communications, 24hr news and the Internet. They could have thrown reality out the window. With this power, they could have made war anything they wanted it to be and convinced a population to kill. This has been done throughout history and this is where we are now. But on steroids.

The current enemy is Russia.

Maybe I could go hard with facts (and I will soon) but what I really want to know is why the US and EU have disrupted energy markets, destroyed Germany and the EU's natural gas supply all for a border dispute on Russia's border with Ukraine. It's nobody's business outside of the interested parties.

I made a prediction that Russia could not win this war in a month. But that they would win this war eventually. I stick by that. That was back in March when Western media was salivating that Russia had already failed. In my previous posts, I got most of it right and some of it wrong. Nobody got this war right. Because this war has changed from an initial border dispute between a minor power versus a larger power which Russia should have won in a month and did not and has now transformed into a conflict involving Western Civilization versus the rise of the East (China + vassal states) and the energy Russia can supply to it overland negating China's weakness.... sea power.

In simpler terms, a clash of civilizations is being forced. Eurasia is a land power. But it is too huge to ever be a unit. Right?

The idea that China via Russia could build a high-speed Silk Road highway to Europe is terrifying to US strategic planning. If it were ever complete, if you could drive or take a high-speed train from Paris to Beijing, then the US becomes an island far from commerce. This is not the reason for the war in Ukraine, but it is a major geopolitical concern.

Ukraine is a battlefield.

It is the open ground where greater powers choose to do battle.

And Russia believed they could win quickly. They drove South and reached the outskirts of Kiev. They drove East and captured Mariupol. That alone would be an armistice option. "Let's make a deal". And any logical deal that does not involve losing your own territory is a good deal. But the Ukrainians did not make it.

Because the Ukrainians are not running this war, NATO is. The orders, the money and the weapons are coming from the West. Because the West is afraid. The West is not afraid of the Russian military. The West is afraid of the challenge to their global hegemony via the petrodollar currency. And their governments are willing to blame their rampant inflation and failing economies on a border dispute in Eastern Europe that most citizens could not even point out on a map.

There are many reasons why the West has inflated its currency, but they are beyond the scope of this article.

With this background, let's talk war. "War is a racket," said Smedley Butler and he was not wrong. What defies logic is that the United States has sent 100 billion dollars to keep Ukraine afloat while its own homeless population is in the millions and dollar inflation defies logic. For what reason? After invading Iraq on a fake premise and abandoning Afghanistan on a whim, there is no moral authority here; so, what is this obsession with a border dispute in Europe? It's hard to believe I wrote about it eight years ago.

It is a geopolitical move to prevent a symbiotic relationship between the Europeans and the Russians based on energy exchange (oil and gas) in exchange for access to the vast EU service economy. With the sabotage of both Nordstream I and II Baltic pipelines by 'mystery actors' (this stuff reads like a cheap spy novel where you already know the culprit after the first chapter).

So, the question remains... who is winning the Impossible War?

According to Western media, Ukraine is smashing the Russian Army. Since, I've got no dog in this fight, I'd like it to be true because I love the underdog in every sport or war. But unfortunately, this war is a disaster for Ukraine. NATO is running the war and that means satellite intelligence, logistic support, training of Ukrainian troops by foreign countries, mass conscription (fifth round), 18–50-year Olds and throwing these men into a fodder line. This is good for spotting weaknesses in the Russian line and successful attacks have been made south of Kharkov. But these successes were orchestrated to make your tax dollars feel like they are achieving something.

I hate maps of war. Especially while a war is ongoing. But I'll go with the Swiss Map. The Swiss are neutral right? They got away with that in WWII so why not now?

I don't think the Russians will stop until they take Odessa. Not only is Odessa a city by the sea beloved of many Russians, but most of the people who live there despite the Ukrainian Government banning the Russian language in 2014 in the city and since the CIA coup under Nuland in 2014, it exists, despite the apartheid as a Russian city.

Militarily, it will be a difficult advance. But the Russians have mobilized 300,000 men. The Russian public wants this. Apart from the difficult advance, Odessa's capture will cut Ukraine off from the sea and render it a non-viable state. It must be had.

War is merciless but never impossible.

This just keeps getting more insane.

Addendum: I'll add to the following to clarify things. I am not a supporter of Russia or Ukraine. I pick no sides. I view what can be seen. War in its naked interest via Western media already includes enough uncritical propaganda for Ukraine. What is of interest is the geopolitics, motivations, resources and constraints of the prime movers fueling this clusterfuck.

Zelensky himself has thus far done a brilliant job in his presidential and ambassadorial role maintaining western political support, and the Ukranian army are legendary heroes for holding out against Russia with all of their clumsy bludgeoning firepower. Ukraine's savior was both NATO assistance and the halting of modern Russia's military reforms.
1) I believe Russia made a global INTEL mistake by invading with insufficient data. Who could have known back in February that the US would throw 80 billion dollars into Ukraine's defense and persuade its NATO allies (EU vassal states) to throw in $20 billion more.
2) I think it is clear now what Russia's initial gambit was. Throw 160,000 troops at the Ukrainians, drive a convoy at Kiev and hope that a minimal use of regular army troops could trigger a surrender achieved by a simple demonstration of force. This was a gross miscalculation and did not happen mainly because US war planners took over this war with the full capabilities of NATO satellite intelligence, weapons imports and raw cash injections which basically keeps the Ukrainian civil service and government alive and on a payroll.3) The US government has gone off reservation. With the sabotaging of the undersea Nord Stream pipelines, it has made sure that there is no profit for the EU (and especially Germany) if they choose detente with Russia either through the realpolitik of dependence on Russian energy supply for their industry or when the riots start in Europe due to cost of living increases. We can already see this as European currencies nosedive while the dollar increases in value despite the fact that 40% of dollars in circulation were printed in the last two years.4) The game is more now dangerous than ever. With Russia changing its stance to a war footing and the US and its EU vassal states (which Putin correctly pointed out in his speech; the EU is a vassal state of the US since the Post WWII Marshall Plan) persisting in attritional type warfare using the men of Ukraine as pawns in a proxy war versus Russia, supplied and armed and trained by NATO, we are entering new territory.5) Conclusion: For the first time since the post war Bretton Woods accord, the US is not being viewed as a rational actor by those who should (China, India, Malaysia, SE Asia). Its actions scream of desperation and maintaining dollar reserve status. Also, Russia has not thought out its actions and seriously underestimated the West's response. The price of this miscalculation will echo down the decades. Russia has now permanently married itself to the East and will be gobbled up for its energy by China. It's passing grade in the war has not helped it. The EU is not a serious entity. It's encroaching bureaucracy, insane energy policies and embrace of globalism and mass emigration has weakened it.   So here we are. Peace seems impossible. The New Cold War I predicted in 2019 is in full effect. And I take no pleasure in this.
We sit and we watch and witness.
An impossible war.
By War Tard at October 31, 2022 93 comments: