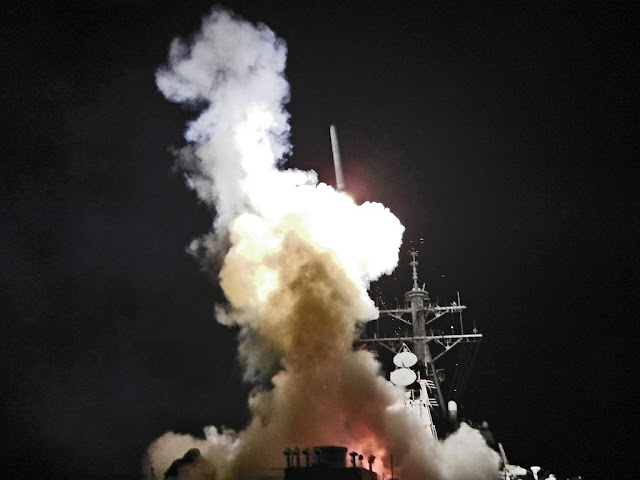 So NATO finally weighed up all the options and decided to act. After the Saudi "Day of Rage" fizzled, the point was made that the West would not intervene in Arab civil wars or support any rebels in the Saudi oil prize vassal state. They even stood by and offered no condemnation when the Saudi's steamrolled armor into Bahrain and started slapping the Shia around for daring to suggest that the 60% 'minority' Shia in that country should have a say in government. With the point made that the West won't always help rebels, it was time this weekend to swoop in on Libya and save those rebels making a last stand in Benghazi.
Intervening in a civil war is serious business. That's why NATO only does it on a selective basis; like in Libya but not Bahrain; like in Kosovo but not South Ossetia. I feel sorry for all those citizens in places like Bahrain, Darfur, Burma, Congo and Rwanda who must be kicking themselves right now that their shitty piece of global geography contains no oil. With the Libyan rebels making a last stand against Gadaffi's forces in the eastern city of Benghazi,  the cavalry arrived just in time to rescue the garrison like John Wayne in some 50s Western. With a UN resolution to protect "civilian life" safely in hand, it was time to launch operation "Odyssey Dawn", a typical NATO moniker dreamed up by some pencil pushing general in the Pentagon. It does seem to suggest though that the West is embarking on a journey here and is unsure of the outcome. Seems about right. NATO are being purposefully vague about the objectives and even stated on Sunday that Gaddafi himself was not the target of British missiles when they levelled his compound in Tripoli. It's pretty funny when they resort to obvious bullshit like that but more interesting when you consider the wider Middle East context. This operation is supposed to look like part of the wider Sunni narrative of Arab uprisings against dictatorial regimes and is absolutely not a Western enforced regime change.
So how did these attacks go down?
Late Saturday evening the French flew some sorties out of Istres air base outside Marseilles and dangled some Mirages and Rafales over Gaddafi's arty and heavy armor sieging Benghazi. This was supposed to scare his army shitless but that never works in war. You need explosions and bodies to make a point and the French proved that in spades by coming back later that night in force and ripping Gaddafi's forces a new asshole. Where the US and Britain focused their attacks mainly against airbases and Gaddafi's compound mostly with standoff sub and cruiser launched Tomahawks (British Tornados, US F-15s, F-16s and B2s were also employed), the French seem to have gone straight for the jugular by going after Gaddafi's heavy armor and arty directly with their air force. That was pretty impressive for the French. I always get the feeling that the frogs are perpetually trying to overcome that 'surrender monkey' rap they got after WWII. We can safely presume Sarkozy will be running for re election.
They caught Libyan armor napping in a field about ten miles outside Benghazi. Sitting ducks for the French, Gaddafi lost all his heavy armor sieging the city with a lot of the crews dying in their sleeping bags near their tanks without a mark on their bodies. Those pressure waves have a nasty effect of turning your insides to jelly while you sleep. Of course, this kind of rape doesn't come without its reasons and not all of them are about the French proving they have decent sized balls. A 2009 wikileaks cable revealed that Gadaffi was attempting to renegotiate the terms of French oil company Total's deal and give Libya a greater share of crude oil production. Ain't payback a bitch? Also, the Euros are pretty freaked out right now about the possibility of hundreds of thousands of hungry Libyan refugees winding up on their shores if Gadaffi gets to take his revenge on Benghazi. That might have been the final straw that set this NATO operation in motion.

Still, it seems like Gadaffi's scorched earth threat to blow the Libyan oilfields might be back on.

In fact, going by the sheer destruction and rapid turnaround in Gadaffi's fortunes, these initial strikes  could be seen by many as a little 'excessive'. Not only were Gadaffi's heavy weapons around Benghazi destroyed but also those retreating to Tripoli  have been subject to a free for all turkey shoot on the main highway. So much so that the Russians, Chinese and Arab League are starting to grumble about the US led coalition with Putin complaining that NATO overstepped the  'mandate to protect civilians' and was engaging in the' indiscriminate use of force'. Typical geopolitical stuff from the Russians who get pissed when the West pulls shit like this with the longterm view of oil price stability.

Of course, that doesn't mean that they're wrong either. It's just means that no one has clean hands. The Russians are probably just pissed that $4 billion in arms contracts with Gadaffi went up in smoke, $2 billion of which were still pending when NATO swooped in and cancelled the contract with Tomahawks. Shit like that tends to make Putin suddenly care about civilian casualties. Let's face it, we're living in a dystopian future sci-fi novel where every nation state is dirty.


That said, there's been pretty much a media blackout on the civilian casualties of these air strikes. As usual, the West is killing people in poorer countries to save their lives. US Navy vice-admiral Bill Gortney gave a press conference at the Pentagon on Sunday and showed a bunch of reporters a series of slides of the attacks and insisted there were no civilian casualties. Not even on the main highway to Tripoli. None of those cars contained civilians of any kind. You've gotta love that kind of bullshit.  Your population will only swallow it when it doesn't give a shit and that's a safe bet right now in Western countries where people are getting jittery about the price of oil.

Gadaffi himself is understandably lying low.
No more TV interviews for him. Now his bullshit comes only in audio format recorded over the phone. That's to aid him in his ongoing mission to dodge a Tomahawk. He has declared a ceasefire with the rebels (to try to buy some time) and threatened to open his arsenals to the civilian population to aid in the defence of the Libyan nation. It's unclear how many people would take him up on the offer of a free AK after he bombed them. He's still got a very healthy bank account though and even without air superiority and much diminished armor, his forces will still present a significant force. Gaddafi has vowed to fight a "long war" and it's still hard to see how a bunch of guys in pick up trucks with no training can defeat Gaddafi's professional infantry. NATO has been quick to point out that it won't be landing ground forces so it will up these 'rebels' to take the fight to Gaddafi.
That's going to be an interesting fight. Urban warfare is tricky. And it can never be won by air power alone. If Gaddafi can avoid dying it's hard to see the rebels pulling this off in the absence of a proper command and control structure. Gaddafi's prediction of a "long war" doesn't seem too wide of the mark. He now has the West engaged in a third 'imperialist' war which is going to play in his favor on the streets of the wider Arab world. No matter what, if Gadaffi can stay alive, he is at least putting himself in position to make a deal with the West should things go south for him militarily; like a beachfront condo somewhere sunny and him getting to keep the billions in his offshore bank accounts.

The coalition too will suffer from command structure problems. Who exactly is in charge of this op? Sure, it's the US right now but they are eager to wash their hands of the whole thing as soon as possible lest it disrupt other interests in the Middle East. For one thing, they don't want the Muslim Brotherhood in nextdoor Egypt getting elected on US imperialist populism fueled by refugees and ugly reports coming out of Libya. The nightmare here for the US and part of Gadaffi's "long war" strategy is the US losing control of Suez, central to US strategic planning in the Gulf. Defense Secretary Gates wants to hand over control of the mission later this week to someone but he doesn't know who yet. War by global commitee is a special type of clusterfuck and can get nasty if conflicting generals start slapping each other around in the press when things don't go the way they're supposed to. Odyssey Dawn indeed.
Ideally for the West this ends with Gaddafi dead and a new compliant Libyan government installed which will go along with a new set of oil deals written by Western oil companies. Either way, this ends up pretty shitty for Libya. The thing is, although Gaddafi is an asshole, he has taken Libya a long way since the 1970s. The country has had the highest living standards in Africa. Various subsidized or free services in health, education, housing, and basic foodstuffs have ensured basic necessities for most people. In fact, quite a lot of Libyans were pretty satisfied with their lot and is why, a few weeks back when this 'war' began, Gadaffi was quick to portray the rebels as a bunch of 'drug addicts' and malcontents. Of course, he jumped the shark when he used his air force to bomb his own people and indiscriminately shelled his own cities. That likely lost him a lot of home grown support he might otherwise have had and caused mass desertions in his military. A lot of guys came back after he started winning and it'll be interesting to see if they stay now that he is 'losing' again.
Right now, he'll likely portray this as a typical Western oil grab in another Arab country and try to churn out brutal urban infantry battles for as long as he can and play to a wider narrative. That narrative is that the West only gets involved in shooting wars in the Arab world when there is oil at stake.
And he won't be totally wrong.