Libya: Does NATO have the balls for a ground assault on Tripoli? 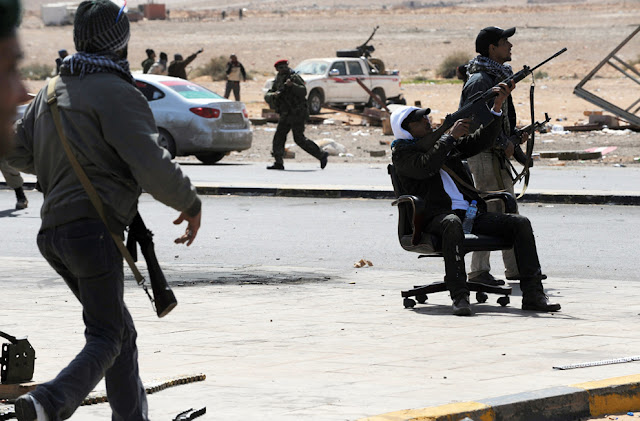 There's no doubt that NATO needs Operation "Odyssey Dawn" to just go away now. Shuffle off into the pages of some history book that nobody will read. That's a pretty good bet these days too. With the collective memory of the public in our dystopian sci fi future bordering on goldfish territory, it's safe to assume that the sleazy corporations and oligarchies that run Western foreign policy could hide behind the curtain and watch this mess go away just by the inexorable force of inertia alone. Or at least until the X Factor comes on TV.
For one thing, this war is making everyone involved look bad. The French and British are just looking ineffectual with their hamfisted air strikes and with the US Congress voting to censure Obama for going to war in Libya without Congressional approval (laugh out loud funny when you consider Bush era foreign policy), everyone involved here is looking like the proverbial 8th grader school trippers at the local zoo who come across the chimpanzee enclosure. Those apes are so cute on the monkey bars until they get bored and start flinging freshly minted shit at the children behind the Plexiglas.
The NATO mission in Libya is a lot like that. The trip sure seemed like a good idea if you didn't stop and think about it. And NATO didn't. Making sure that the supplier of 10% of the EU's oil didn't self destruct and flood the Euros with Muslim refugees in the process sure seemed like a good idea when NATO first started dropping precision ordinance on Gaddafi's tanks outside Benghazi. And barring some lucky Tomahawk strike on Gaddafi's tent (and that's always a possibility given the right intel), the NATO mission in Libya went wrong fast. That's not to say there was ever a definition of what the mission going "right" meant either.  Like Gaddafi predicted, it's already gone on longer than NATO bargained for and now they're left without a convincing exit strategy. That's always been the problem with starting small wars when you're the big guy on the block. Once you start them, you can't walk away without a win. Otherwise you just look weak. That's playground logic that every bully who preys on lunch money knows. With Gaddafi's lunch money proving harder to grab than anticipated and him entrenched in fortress Tripoli that no air campaign is ever going to break, it looks like NATO get to be the kids stuck behind the Plexiglas watching incoming turds.
And this is where it's fun to entertain the possibility of a ground assault.
Sure, it's never going to happen right? But let's engage in fantasy here for a few minutes, grab some popcorn and play around with the idea that the Euros have balls and how a ''boots on the ground strategy" might play out. This war was never supposed to go the distance. In the minds of politicians in Western countries, they've got this awesome military at their disposal with the latest multi million dollar combat aircraft to push around on the global chess board and anything that doesn't equal an automatic military win means there must be a glitch in the Matrix.
Gaddafi, for his part, engaged in some high level trolling of the Euros last week. Just the other day, he threatened them with the prospect of hundreds of fools willing to martyr themselves on the streets of Paris and London if NATO didn't stop the bombing. Threats like that tend to piss people off and make the media jizz at the prospect of all the advertising revenue they'll bag while reporting it. If there's one thing the IRA proved when they started bombing economic targets in London, like say Canary Wharf in 1996, is that 'terrorism' tends to bring the politicians to the negotiating table. The dirty little secret of modern warfare despite the hype is that 'terrorism' works. Hell, it has always worked. It just comes down to what you define as terrorism. Carpet bombing cities sure counts. The London blitz, Dresden and Hiroshima were all pretty damn terrifying. If you're gonna bomb Tripoli with Rafales and Tornados, no matter how you dress it up with fancy talk about 'strategic aims' and formal apologies, when that GBU blows up in the wrong place and kills a bunch of fruitsellers it's media time and the chimpanzee shit goes airborne. Truth is, intent doesn't really matter as the smoke clears. Dead bodies are dead bodies. That's war. And it's pretty damn terrifying.
So the real question, in our little fantasy war, is how does NATO conduct this ground campaign that'll have us grabbing the popcorn and that'll probably never happen. First off, let's take it for granted that the US, the Brits and the Frogs already have ground forces in theater. You think they could trust a bunch of those illiterate rebels in Toyota Tundras to target paint Gaddafi's tanks all by themselves? Foreign special forces have been running around Benghazi since this thing started.
Could the French and British pull off a balls to the wall amphibious assault on Tripoli? Truth is, they probably wouldn't need to. The British would have HMS Ocean to throw at the job and the French have three Mistral class amphibious assault ships already linked up in the Mediterranean. But it'd be far easier to just unload the armor from cargo ships in Benghazi and push across the desert Eight Army style, rolling up strategic oil towns like Brega and Ras Lanuf along the way. That'd be a bit of a buzzkill on the amphibious landing front though. We haven't had a cool one in war since Inchon back in 1950.

Still, the armor drive would be fun. 1941 all over again with British armor pushing across Libya and no Rommel to contend with. Just Gaddafi dressed in his 70s porno curtains. Of course, there's no public support for any of this right now, but let's say for the sake of argument that Gaddafi pulls off that threat of martyr bombs in Paris and London. All it'd take is a stack of bodies in your capital and an external enemy to blame it on to have the public crying for blood.
For more wargasm, let's assume the British break out some Challengers IIs to do the job. You know I've always wondered how that classified ceramic "Chobham" armor of theirs would stand up to relentless RPG fire. Sure Iraq was a test case but Basra was no Fallujah. The French too have their own Main Battle Tank to throw at Gaddafi, the 'Leclerc', which unfortunately for the Frogs, sounds as threatening as some guy who works in a bank. When was the last time the French were involved in proper tank battle anyway? Oh yeah, summer 1940. Ooops.

Once the NATO armored column got to Tripoli they'd probably head straight to the airport and set up a FOB right there and resupply themselves by air. That strategy worked out pretty well for the US marines when they took Baghdad in 2003. Occupying some real estate in the heart of the enemy camp is a pretty good bet when you're up against a teetering dictator with wavering support and an army who could ditch their uniforms and walk away when things get difficult. Occupying enemy real estate is also a handy way of testing what kind of fight the natives want to bring to the table. And with total air superiority, it'd be hard to see this working out bad for NATO. Of course, it's not the kind of strategy you'd employ anywhere else but in a fading dictators desert capital. But winning might still be tricky, especially if Gaddafi's forces were to prove resilient and everyone and their mother started grabbing an AK from the local armory. Unlikely, but then again, there's always the unexpected in war. My guess is Tripoli would fold in a week with a few small enclaves of die hards holding out a while longer.


The question is, do the Euros have the balls to put their military on the world stage? Or the cash? The Russians and Chinese would sure like to know. This Libyan mission, like all small wars greater powers get mixed up in, always work out as test cases for bigger 'proper' wars. When the Russians handed the Georgians their ass in the NATO proxy war in South Ossetia in 2008 we all learned that the Warsaw Pact tank divisions hadn't really gone away. The Libyan debacle, no matter who says what, is an interesting test case for NATO as an effective fighting force. Right now a barely passing grade doesn't inspire much confidence.

But this war still comes down to economics. With all kinds of embargoes, Gaddafi is running out of money and the situation in Tripoli is worsening. Tripoli has always been the place Libyan sophisticates hang out drinking lattes, sucking sweet smoke from fragrant hookahs and discussing how bad the western imperialists are. Truth is, a lot of them had it pretty good under Gaddafi. Free health care and free education right on up through university. Once those illiterate rebels from Benghazi take over who knows what'll be left for the coffee drinkers. Half those fools are Islamic hardliners from the desert who signed up to fight the Yankee imperialists in Iraq and Afghanistan. They don't do Starbucks culture very well. That's why the sophisticates sided with Gaddafi in the first place. Now coffee supplies are getting leaner and bread is being baked by female volunteers. Stuff like that tends to make cafe dwellers reassess their priorities.

Paradoxically, NATO broke a cardinal rule and bombed the oil facilities at Brega last week. That's like the bully spitting in his victim's lunch before actually taking it and smacks of NATO desperation to get this thing over with. They claimed Gaddafi was using it to fuel his army. But the useless rebels held it a month before and managed to fill a tanker and collect $100 million before they passed "Go". That at least proved to the western corporatocracy that these fucktard rebels can at least play ball on the oil front.

Gaddafi himself sees the writing on the wall. There's no win for him here long term and like all old men, he doesn't want to die penniless and locked up in some Euro jail. He's shrewd enough to see NATO's predicament and can give them the "victory" they need in exchange for a transfer of power to his son Saif, some kind of immunity from a war crimes trial in The Hague and, most critical of all, getting to keep some of that money he's stashed away in myriad offshore bank accounts. Beachfront property and a comfortable retirement sure seems like a good deal now and he's softening on the 'fight to the death' bullshit he was spouting when this war got started. If he's to cut a deal, he'd better do it quick before the rest of his generals defect and his troops chuck their uniforms, go home and act like they know nothing about rape and pillage.

In respect to that NATO ground assault fantasy of mine, it looks like my popcorn supply is safe.
By War Tard at July 13, 2011 13 comments: