The M2 Browning .50 cal: A ghost gun from another era. 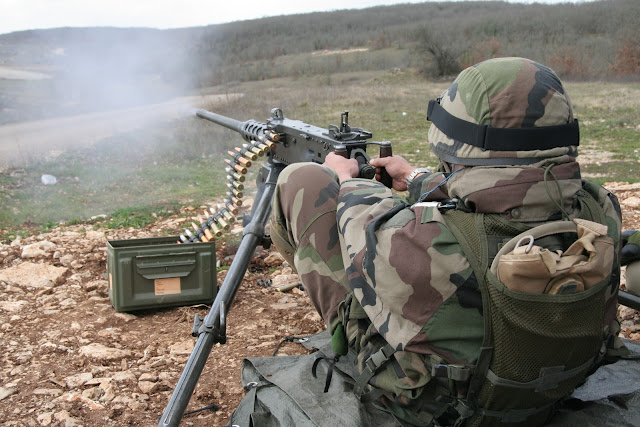 Go ahead and name some piece of machinery originally designed and made in the 1920s that is still in use in pretty much its original form today. You'd be hard pressed to find anything as ubiquitous as the M2 Browning machine gun. The .50 cal or 'Ma Deuce' is like some dinosaur walking amongst us today, like the gator that chewed your leg off when you innocently went swimming in your Floridian urban sprawl condo pool that happened to extend into the Everglades; a hazard your sleazy real estate agent allowed to get lost in the fine print when you signed the lease.  Sure, you miss your leg but you find yourself respecting the ancient intelligence that chewed it off.

Its design is just so damn perfect that nobody has dared mess with it much and even today many of the newer modifications would be compatible with the original 1920s model. In today's shitty dystopian sci fi novel that we're all living in, it seems everything from washing machines to automobiles get manufactured with a built in fail date so you'll have to buy a whole new one from 'MegaCorp' in a few years; and toss the old one in the ocean somewhere where it'll kill five dolphins. Not so the .50 cal. Of course, this was a time before the Bladerunner corporations that make everything today owned the government. There was a time once when a government design contract meant the best possible design and was not the best possible way to spread corporation cash to the most Congressional Districts to get re elected.
The designer himself, John Browning, was a pretty fun gun nut.
He was born into it. His father, a Mormon pioneer and gun designer himself, was part of the mass exodus that followed Brigham Young from Illinois to Utah in 1847 in search of an American Jesus. Or something.  I love how religious folk like Browning are always drawn to weaponry. I just have a little trouble finding the part in scripture where Jesus liked to break out his peacemaker when things got sketchy. Sure, firepower is always handy but Jesus was not the type of guy with a backup plan in case the peace and love message didn't work out for him. It's pretty funny how his followers today tend to eschew that philosophy in favor of something with a little more stopping power.

And the M2 Browning sure has a lot of stopping power.

If you get clipped by a .50 cal round it's pretty much a death sentence. The hole in you is large and bleeding out from artery leakage is a bitch. And that's if you're 'lucky' enough to just get whacked in a limb. Anything in the torso gives you a few seconds to remember how Mom made Christmas fun by lying to you about the existence of Santa Claus and the origin of the presents under the Christmas Tree. Then it all just goes the way of nothingness. Browning himself, of course, would beg to differ and say a nine inch hole in your chest is just a flesh wound in comparison to the paradise to come.

Browning's first design was a single shot rifle which the Winchester company soon bought the rights to and, before long, the young Browning was fully employed by Winchester and producing a slew of single shot rifle designs; probably the most famous being the Winchester .30-30 that you've seen in just about every cowboy movie ever made.  Interestingly, Browning himself was responsible for WWI. Well, not really. But he did design the FN Model 1910 automatic pistol that offed Franz Ferdinand in Sarajevo in 1914 that sparked the whole clusterfuck. Not Browning's fault, but still a mishap you are going to have to explain to Jesus at the pearly gates.


But Browning's greatest legacy is probably the M2 .50 cal. Still a mainstay not just in the US military but in the militaries of over a hundred other countries, the reliable old .50 cal is still increasing the body count in multiple war zones today. The original design order was placed by venerable old war dog John J. Pershing when he was faced with the task of whipping up a US army to chuck onto the Western Front in 1917 to prove to the Euros that splendid isolation wasn't all it was cracked up to be. Pershing needed something heavy that could shoot down aircraft (those Fokkers were still bothersome in 1917) and a gun that could punch through the thin armor of the Kaiser's armored cars.
Browning set about the task.


The original M2 started out water cooled with a heavy water jacket, like the British Maxim gun that was proving so effective in the trench stalemate. It wasn't until after the war ended though and in the early 1920s that Browning's gun started to mature into something serious. The water jacket was obviously cumbersome and wasn't much use if you wanted to mount the gun in aircraft wings; aircraft being seen in the 1920s as the new 'stalemate busters' in any future war. That's why the Versailles Treaty allowed the defeated Germans no aircraft and how their glider program got started; ironically educating the likes of Kurt Tank and Willy Messerschmitt in the fundamentals of flight. Isn't it funny how the best laid plans of mice and men tend to backfire? Those early glider guys went on to design the Me 109 and the FW 190.
With about 140,000 machine guns lying around and gathering dust after the Great War, the US felt no immediate need for new gun development. But then, as time went on, all these guns started becoming obsolete, Vickers, Lewis, Marlin... but not good old Browning's M19171A. It still had merits and just needed an upgrade for the 1930s. One of these was standardization. The brass were onto something when they issued a requirement for a heavy machine gun that could be used in a universal role across all branches of the services. A heavier barrel was introduced, designated the M2HB, that increased heat dissipation but sucked for infantry teams that had to carry the thing. But infantry fire teams were never where the .50cal's destiny lay. Its true home was as the standard gun on almost every tank, APC and WWII era fighter that the brass could spread it to. Unlike today, cost used to be a factor in the American military budget. And with the M2HB mounted on every vehicle and in every aircraft wing possible, saving taxpayer money was something that once made sense to law makers unguilty of taking 'Tyrell Corporation' cash.
The M2HB (heavy barrel) is the variant we all know and love today. Today, it's mounted atop the M1 Abrams and standard on Humvees in Afghanistan and Iraq. That's pretty much confirmation of the success and ubiquity of a hundred year old design. It comes in very handy when you've got a bunch of 'insurgents' holed up in some structure but isn't worth an HE round from your main barrel. Thanks to Pershing and that heavy .50 cal round design order, you just spray the structure, knowing that rounds eat concrete like cookie monster and anyone inside who gets clipped loses his ability to run like fuck.
But what good is a major gun like the .50 cal today without a personal interest piece?
In today's bullshit media environment the only way to present something that the plebs will find interesting is to wrap it up in some story that makes sense to today's "gas your vehicle, work like fuck and watch the History Channel" for ancient aliens to know how better off they are than anyone in human history because they have TV and Internet and didn't get their ass conscripted into a war.
So I present to you, American badass and volunteer, himself a ghost from another era, Audie Murphy.
Sure he became a 'star' and banked some cash after his exploits in WWII but he was always the reluctant star and spent the first bundle he made on a home for his extended family. Always modest and the uneasy hero (as any true bona fide hero must be), he's always struck me as the ideal American military archetype. He harks back to a time in American history when you could admire a guy for his courage and stands in contrast to today when the media manufactures heroes by sheer control of the airwaves; like that dim blond Jessica Lynch that got 'rescued' from an Iraqi hospital in 2003 by Special Forces even though the Iraqi doctor that treated her was begging for her to get heloed out of there days before the media-industrial-complex decided they could latch onto the event and feed the plebs a feel good story.
Murphy earned his Medal of Honor on a .50 cal in 1945.

I'm not going to try to bullshit my way through his actions. I'll just let his MOH citation speak for itself.
"Second Lt. Murphy commanded Company B, which was attacked by six tanks and waves of infantry. 2d Lt. Murphy ordered his men to withdraw to a prepared position in a woods, while he remained forward at his command post and continued to give fire directions to the artillery by telephone. Behind him, to his right, one of our tank destroyers received a direct hit and began to burn. Its crew withdrew to the woods. 2d Lt. Murphy continued to direct artillery fire, which killed large numbers of the advancing enemy infantry. With the enemy tanks abreast of his position, 2d Lt. Murphy climbed on the burning tank destroyer, which was in danger of blowing up at any moment, and employed its .50 caliber machine gun against the enemy. He was alone and exposed to German fire from three sides, but his deadly fire killed dozens of Germans and caused their infantry attack to waver. The enemy tanks, losing infantry support, began to fall back. For an hour the Germans tried every available weapon to eliminate 2d Lt. Murphy, but he continued to hold his position and wiped out a squad that was trying to creep up unnoticed on his right flank. Germans reached as close as 10 yards, only to be mowed down by his fire. He received a leg wound, but ignored it and continued his single-handed fight until his ammunition was exhausted. He then made his way back to his company, refused medical attention, and organized the company in a counterattack, which forced the Germans to withdraw. His directing of artillery fire wiped out many of the enemy; he killed or wounded about 50. 2d Lt. Murphy's indomitable courage and his refusal to give an inch of ground saved his company from possible encirclement and destruction, and enabled it to hold the woods which had been the enemy's objective."
In reality, the guy suffered from PTSD for the rest of his life. And this was a time when psychological casualties of war didn't exist officially. He did it from the exposed position of the mounted .50 cal on Sherman tanks at the time that made you sniper fodder. That's badass.
Just like Browning's century old gun.
It makes me wonder what humans will be firing at each other 100 years from now.
Einstein's sticks and stones or George Lucas laser guns?
By War Tard at April 01, 2011 7 comments: