Mali: The French go to the desert. 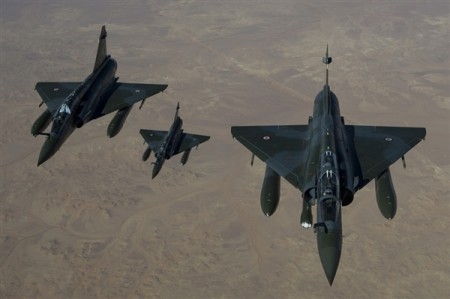 It's always time to break out the popcorn when the French go to war.

The French intervention in Mali, Operation Serval, isn't exactly a shocker since the French can be pretty touchy when it comes to what goes down in their former colonies. True, the French can be pretty touchy about just about everything but foreign deserts they used to own get them extra twitchy. Especially since their former Saharan colony in Mali is engaged in one of those shitty Islamic civil wars where the bad guys are threatening the official French friendly government. It's one of those typical post colonial African wars we've been seeing a lot of lately. As usual, the bad guys want to turn the country into some shitty Sharia theocracy  and re enact that monkey bar training video Western media roll out every time they want to remind you how easily you could die on the bus to work if the designated scary people get their hands on some ungoverned desert real estate.

The new French President, Francois Hollande, decided to intervene militarily which is seen as a ballsy move for a liberal and buys him street cred with a French population feeling decidedly small on a world that has become decidedly large since the heady days of Napoleon's 'whiff of grapeshot'. Sure, the French bombed Gadaffi with British and American help but Mali is their baby and a war they can  win all by themselves. Yes, Obama will probably throw some drones into the mix to help things along but the French winning a war will be a self esteem boost and help with the new American strategy of letting their allies clean up their own messes for a change.

In truth, Afghanistan has taught the US the lessons of imperial over reach and how protracted campaigns, even against goat herders, have a tendency to bankrupt your treasury. So it's time to put on the training wheels and see if the French can deal with the crazies in the desert all by themselves. There are good reasons the French are touchy about Mali. The one thing about civil wars in Africa is that they have this nasty habit of spreading into neighboring countries due to the arbitrary lines the Euros drew on Africa when they were chopping it up for fun and profit. One neighboring country is Niger, and that's currently number one on the French list of favorite former colonies.


Because Niger is France's main supplier of uranium, that pesky yellow cake the Bush Administration lied about when they needed access to Iraq's oilfields. Uranium is basically what keeps the lights on in France and nuke reactors provide 75% of Gallic electricity generation; electricity they also export to neighboring countries for serious bank. Any disruption in supply and the French get further exposed to the big fear of every developed economy in the 21st Century; buying energy on world markets that are sure to get increasingly pricey as we strip mine the planet frantically in search of more juice.

Right now, the French have retaken all the key objectives in northern Mali but that's the easy part. Warfare these days is boring as hell because the results are so predictable. How can a bunch of guys in pick up trucks with AKs possibly go up against Mirage jets, attack choppers and trained troops? They'll just run away even if it means postponing the rendezvous with the 72 virgins in the after life. The ability of these people to hold ground is non existent and with all that empty space out there, it's just as easy to run away for a while and see how much money the "invaders" want to burn holding on to their newly acquired desert. The current plan includes a UN and African force (ECOWAS) coming in after the French scatter the bad guys so everyone can share the price tag. 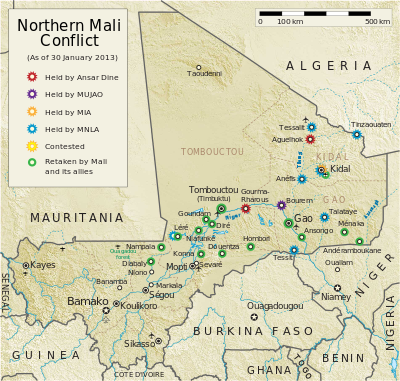 One of the main rebel groupings fall under the banner of the Ansar Dine. They're just another bunch of wannabe al-Qaeda's who drive around in Toyota pick up trucks sporting slightly rusty Warsaw Pact surplus small arms (RPGs, DShK 12.7mm and the usual plethora of AK variants) and want to impose strict Sharia law on every poor fuck with a camel. This means chopping off kids hands for stealing an apple, stoning women who flash their ankle and getting rich off unsecured mineral wealth if given a chance. If you're a poor guy in Africa who can handle himself in a scrap it's not a bad career choice considering the alternatives are tending goats, tending camels or hitting up Bono for a handout.

By far my favorite outfit in the Mali desert are the Tuareg warriors.

They are pretty badass fighters. They're one of those old nomadic Saharan tribes who never had much use for civilization and preferred wandering the desert and discovering cool new interesting stuff like water. Then, when African nations gained independence from the colonials in the 1960s, the Tuareg found their open ranges suddenly chopped up into nation states; nation states that didn't fancy free peoples wandering across their bit of desert. The Tuareg are indigenous to Mali, Niger, bits of Algeria, Burkina Faso and even African behemoth Nigeria. They fought the French with swords v machine guns in the early 1900s and that didn't work out well so the Tuaregs were forced into treaties that chopped up their roaming grounds. Most recently, Gaddafi hired them as mercenaries (or private contractors if you prefer contemporary nomenclature) for $1000 per day which approaches Blackwater or Halliburton payscales. One side effect of their involvement in Libya was that they got to loot Gaddafi's armories when the smoke cleared and sailed through Niger and Algeria's porous borders to Northern Mali in 4x4s flush with some nice Warsaw Pact weaponry. They've been selling this to the Islamic sky god believers and making some nice bank on the spoils of Gaddafi's defeat.

All this desert warfare got me thinking of the state of the planet in the 21st Century. It's falling rapidly into three distinct camps.

Number one is the old school West; modern, advanced tech nations that have grown fat since the industrial revolution delivered the wonders of the light bulb, the flushing toilet and the laptop. They conquered everywhere and have been sitting pretty since the 19th century. True, they raped the earth to do this but there are side benefits like free education, pensions and welfare states. Trouble is, all this stuff costs money and that's getting increasingly hard to generate on a planet getting smaller by the second. There just isn't much real estate left to exploit to fund the relatively easy lives of the population back home.

The Asian economies, on the other hand, are working with hive like determination to get back into the game. With huge populations that'll work for cheap, the West thought it'd be a good idea to outsource manufacturing so everyone could have a cheap car and a flat screen. It was basically a way of lowering prices for stressed consumers in the West, a sort of cultural welfare program that worked out well in the 1990s and 2000s but now, the beanstalk has grown huge into a proverbial behemoth and China may become the dominant power on the planet by 2030.

The third grouping is all that mineral and energy wealth of the Middle East and Africa. The problem is that people happen to live on top of it. Angry people. One of the side benefits of dirt cheap manufacturing is that technology has become so cheap, even poor people can afford it. That means every mud hut in North Africa and the Middle East has a satellite dish where they get to see the fruits of the modern consumer dystopia beamed into their living space. It's a bit of a culture shock for feudal medieval desert dwellers with strict laws on what you can eat and fuck. They get to see what their lands have been raped for and what they're missing out on. This causes some kind of critical self examination where they get to see the emptiness of living under Imams where they have to obey laws written by some Dark Age goat herder who said women have to dress in black tents, nobody can have sex just for the fun of it and you're not allowed to drink either, even if to wash the pain.

How do you wash away the pain of hundreds of years of oppression and strict theocracy?

Blowing up the rich assholes in the West with all their fancy tech goods is a fallback remedy when your god says you can't get some love from the woman dressed in a tent living in a tent in the village down the way. The Amenas gas complex hostage crisis in Algeria is just the latest example of this. The 'Islamic extremists' in the desert are liable to strike easy but strategic energy hubs because these are the things the rich fucks in the West need from their desert; things they don't really need since they're never gonna see the profits anyway. Those profits go to the local strongman who rules the country with an iron fist and Western weaponry. Oil and gas fund those Western lifestyles they see on TV, selling stupid shit desert dwellers never even knew they wanted. The answer is Jihad. Jihad in the name of an exploited history. Jihad because my god is better than your god. Jihad because I'm stuck in a desert fapping to reruns of Baywatch on my cheap Chinese made TV.

You know what the worst thing about these three distinct global camps is?

None of them are the "good guys".

That's the thing about the 21st Century.

Everybody gets to be an asshole.

It's not like the previous century when the fascist bad guys were so obviously bad and easy to define. These days war is entertainment. The major powers get to fight in foreign places far from their doorsteps and we watch because the explosions make for good TV. But what happens when the desert dust ups draw a major clash and switch from proxy warfare to direct conflict between major powers?  Right now the world is a Real Time Strategy game with three distinct races. The tech advanced West with expensive units but soft populations, the economic East with millions of infantry and hard, hive mind populations and then the fanatical "terrorists" in the desert with asymmetric tactics and vast energy reserves.

I'd play that RTS game.

If it were a game.