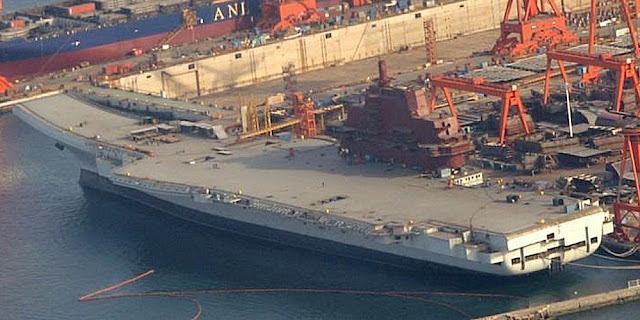 Seems like China has its first aircraft carrier ready for sea trials.
You can't really call it a 'new' carrier though. A Chinese businessman bought the hull with no engines, steering or fittings from Ukraine in 1998 for a mere $20 million and towed the rusty pile of metal around Africa's Cape of Good Hope in a pretty desperate attempt to get it back to China. Ostensibly, the Soviet "Varyag" was destined to be an "entertainment center" which is code speak these days for casino. Somewhere along the line though, the People's Liberation Army snapped it up and the Chinese have been refitting it for military service ever since.
Probably the most fun thing about this ship is what the Chinese are calling it, the "Shi Lang". Yeah, that meant nothing to me either. But a quick googling reveals Shi Lang was a Chinese admiral in the 17th century who conquered Taiwan in 1681. And that right there is a pretty clear broadside aimed squarely at the US Navy. It's pretty funny really. The Chinese just can't seem to let Taiwan go. The island has been independent since 1949, the refuge of the Nationalists and followers of Chiang Kai-shek who fled the mainland after losing power to Mao and the Communists. Why the Chinese think they might need a carrier to attack an island that's a mere 100 miles off the coast is any body's guess but as with most things concerning China, they're playing the 'long game' here. 5000 years of Chinese history affords them a lot of patience as they climb inexorably to superpower status.
Still, I doubt the US Navy is too worried.
For one thing, carriers are pretty useless on their own and need large support fleets to operate with any degree of effectiveness. They're also big fat targets for every kind of anti-ship missile on the planet. The Chinese themselves have just developed their own new Anti Ship Ballistic Missile, the Dong Feng-21D. Yeah, that's D for Dong right up a USN carrier's tailpipe. If this system works, and preliminary testing hints that it does, then it's a pretty serious threat to the US Navy. Launched from land based launchers and travelling at Mach 5 or more (high hypersonic) and with a range of 2000 miles, the DF-21D will be aimed and guided to blue water targets by Chinese satellites. Even the USN War College has admitted that when this system is fully operational it pretty much takes US naval dominance off the table for the first time since World War II.

The fun thing is though, in any prospective US war with China, target number one is going to be each other's spy satellites. The US is still way ahead in space war technology and the first day of this war will involve some pretty fireworks in the night sky. China would lose. Rendered blind they'd be unable to guide the Dong Feng to blue water carrier groups offshore using space tech alone. That'd mean they'd have to sneak a sub up to a carrier group for targetting intel and that's never easy. Still, the Chinese did manage to surface an old diesel powered sub in the midst of a USN war exercise off Taiwan a few years back that had the Navy brass scratching their heads.
Still, even if carriers are rendered pretty obsolete by today's missile technology, it's still interesting to speculate why China thinks she needs one. China is pretty touchy about her shipping lanes and her dependence on oil imports from the Middle East and Africa. You can see how throwing a few carriers at the problem would make her feel a little better about this. The British are currently bankrupting themselves building the new Queen Elizabeth and Prince of Wales carriers which just this week may increase in price, from $8.7 to $11.7 billion all because of a minor design tweak so they can accommodate the new F-35C Lightning IIs; aircraft which themselves cost $156 million each!

Another reason why you might want a floating airport with a big fat bulls eye painted on the flight deck is for prestige. Good old, my dick is bigger than your dick bullshit; demented human reasoning probably around since the first caveman crafted his first spear and the other guys around the campfire got jealous. Power projection is something they can do and carriers have made the NATO job off the Libyan coast easier I suppose. But all that only works when you go after a pushover military with no advanced missile technology.
In 2002, the Pentagon tried to suppress the findings of a huge US war game called "Millennium Challenge" where the US Navy (Blue Force) was pitted against a "hypothetical rogue state" (Red Force) in the Persian Gulf region. Red Force was led by Lt. Gen. Paul Van Riper, a total bad ass, whose job was basically to play the role of the butt raped lesser nation at the hands of the mighty technology of the all powerful US Navy. Instead of following the script, this Van Riper guy went off reservation and went all asymmetrical on Blue Force's ass, an ass which consisted of a full US Navy carrier group.

Though the rules stated both commanders could use any rule in the book, the brass didn't expect the shit Van Riper pulled. Once the war game was up and running Van Riper's force disappeared off radar. He relied on couriers instead of radio to stay in touch with his field officers. The US navy cryptographers were rendered useless in a single blow. He employed novel tactics such as coded signals broadcast from the minarets of mosques during the Muslim call to prayer, a tactic weirdly reminiscent of Paul Revere and the shot heard round the world. He even used carrier pigeons to deliver messages to some of his commanders. God I love this guy! He then launched a daring attack against the US Blue Force carrier group by hundreds of kamikaze speedboats some of which were armed with Chinese Silkworm anti ship missiles. I shit you not. The result was a carrier and two helo carriers sunk along with 13 other assorted ships, the worst defeat of the US Navy since Pearl. The Pentagon had a shit fit and scrubbed the whole exercise, dismissed Van Riper and replayed the whole thing this time making Blue Force 'win'. Basically, the navy brass pretended it never happened. Lunatics in speedboats apparently don't count and are considered 'cheats'.

The US Navy brass like carriers because of the sleazy defense contracting business and the way the US military budget works. You've got to gobble up all the cash you can in a given year and not save anything otherwise you end up losing those savings in next year's allocation. The Navy and Air Force do this with fat expensive carriers and the F-22 Raptor, projects sure to soak up billions and have juicy cost over runs that keep tax payer money flooding Congressional Districts with campaign cash.
Another thing the Chinese don't have yet are aircraft that can serve on a carrier. Beijing recently 'leaked' info on their J-15 Flying Shark which has the folding wings and bulked up landing gear needed for carrier operations. They are still at the testing stage and again, I doubt if the US Navy is too worried. It'll be years before a Chinese carrier group is operational. In fact, there's probably nothing more the US Navy brass would like to see than China sink a few hundred billion into carrier fleets. With 11 active carriers of their own costing billions a year to operate, they more than anybody know what a dubious return on investment carriers can be.
By War Tard at April 30, 2011 19 comments: