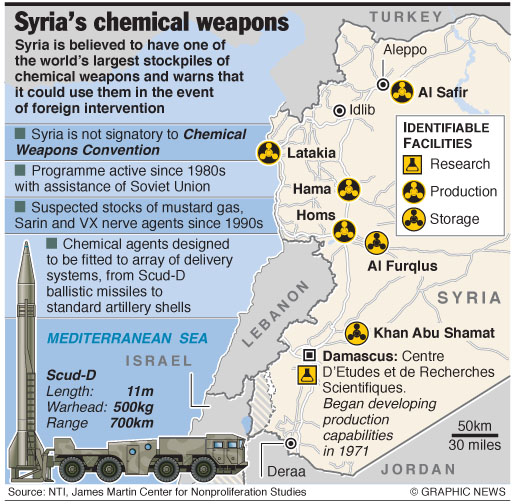 Because, according to Western media, Bashar al-Assad's regime is so desperate that it's threatening to bust out the chemical weaponry and watch the world burn. Death by chemicals is the kind of warfare that makes comfy consumer populations in the US, Europe and even in Russia and China squirm. Chemicals are destabilizing due to the simple horror aspect of their use. Nobody anywhere wants to die WWI trench style. Sure, the trenches of the Great War are far away in the popular imagination but mustard gas, that persistent, skin lesioning horror chemical remains in the collective memory of anybody who ever picked up a history book. Chemical weapon usage is a sure sign that the Assad regime in Syria  is about to die without an exit strategy.  When you load the bombers with chemical weapons you know you've gone full Tony Montana on the whole situation.

Suddenly, the world is watching the war in Syria and every major power has a stake in the game.

Up to now, Russia and China have been blocking UN Security Council votes on intervention because all the major powers see Syria as a valuable pawn in the global energy chess game. The Middle East is ground zero and Damascus is the historic and spiritual gateway to the soul of Arabia.

Chemical Warfare is the kind of warfare that makes general populations shudder.

Sure, you could argue the case that it makes no difference how you die in a war. Death via explosives or via bullets or via sarin or mustard gas is all the same, right? You still end up dead so what's all the fuss about?

Death by gas is cheating in the popular imagination. And there is wisdom in this.

War can be fair. It is possible to kill people opposed to you via exploded metal projectiles aimed down a tight cylinder. You can also kill people via a 2000lb GBU laser guided bomb that turns your target's whole body into red meat spray. But killing by chemical is the worst kind of war by every human calculation. It's deadly and most of all, it's indiscriminate.

At least an artillery strike is aimed at something, right?

Chemical weapons seep across the land. They infect the body. Even if you survive, the cancer may appear later in your kid. Chemical warfare is deemed terrible by our thinking because, while we can all agree that we hate the enemy and want to kill him, chemicals in our bloodstream shouldn't destroy our children. Just because I want to kill that opposing guy with the AK doesn't mean I want to gun down his kid too. Nearly every human who ever lived loved their kid. Even though it sounds crazy, even war can have rules.

And chemical weapons break those rules. Chemical weapons break the rules by wiping out everyone everywhere. They're like messy nukes. At least nukes have the courtesy of vaporizing those at ground zero and are so lethal they cancel out their own use on the mutually assured destruction (MAD) paradigm. Chemical weapons are different. You can sneak them in there and maybe get away with using them. Not of course against the US or her allies. Current US policy on chem usage by foreign entities runs like this:

"The current US retaliation policy, known as calculated ambiguity, warns potential adversaries that they can expect an “overwhelming and devastating” response if they use chemical or biological weapons (CBW) against the United States or its allies".

In other words, you get Nagasakied if you try any "funny stuff".

If Bashar al Assad is loading his fighter bombers with chems than you know he knows he's already dead.

There is no exit strategy for him and his family.He's trapped, beaten and probably delusional.

If chemical weapons are used then it's basically an invitation to NATO to walk into Syria and grab some amazing free Middle East real estate. Russia and China will wilt and withdraw support for Assad at the UN Security Council because once you go chemical on your population you've gone full Saddam and nobody anywhere will feel any sympathy for you.

Assad has a selection of gases at his disposal but they mainly come down to just two. Mustard gas sure  is one ugly compound. First deployed in WWI, it likes to pool and remain skin melting in small depressions in terrain for days. The other choice, Sarin gas, makes your muscles fail on contact and you usually die of suffocation because you can't draw air into your lungs a few minutes after exposure.

While Syria doesn't have much oil, for Western war planners, it has another quality that's hard to sell on the world market.

Damascus is the spiritual heart of the Arab world. Mecca and Medina might be nice but Damascus is the home of the real philosophers of Arabia. Damascus had street lighting while the cities of Europe were black in the Dark Ages. The neighboring Egyptians see themselves as the home of Arabian Sunni identity and their revolution is significant. But the fall of Damascus to new powers will be the most significant war in the Middle East since T.E. Lawrence captured Aqaba.

If Assad uses chemical weapons against his own population he will instantly lose Russian and Chinese support. It'd be a suicide move. That's why I think this whole chemical story in Western media is overblown. One of those fed to the media via "unnamed government officials" that stinks of CIA subterfuge. Still,  I've always marveled at the existence of Assad. He's the son of a famed father, Hafez al Assad who would've known how to deal with Arab Spring rebellions early. His dad would have killed every protester in the street and called them communists or whatever word was necessary to gain support from a major power. Arab dictators who don't play ball in the energy chess game get designated as the enemy. Arab dictators who play ball in the game get called friends.

That's why king Abdullah in Saudi Arabia is seen as a philantropist and major US ally and Colonel Gaddafi went down fighting with pistols like a badass from the back of a pick up truck. Life and death in the desert is a precarious occupation. It's always been that way. The difference these days is that the world economy depends on the stuff that's buried under Arabian feet.

Either Assad is totally desperate and ready to press the red button that will extinguish his whole dynasty Gaddafi style, or, he's already been told by the Russians that he's gone too far and there is no retirement option in a villa on the Black Sea in his future.

Anyone who's ever played a hand of poker knows that you double down on the bluff when your credit line just got cut off. Maybe someone will believe that crazy look in your eye. So you push all your chips into the middle of the table. That's Assad right now. Chemical weaponry is a way of breaking the bank.

Using chemical weapons would be like Hitler biting into a cyanide pill.

It's certain death multiplied by the destruction of your country.

But you know what?

Wounded animals are more dangerous. Dictators are prone to shitty decision making when confined to a bunker. When you know you're about to die and you've got nothing else to lose, sometimes it's fun to just sit back and set the ignition fuse on the firework.