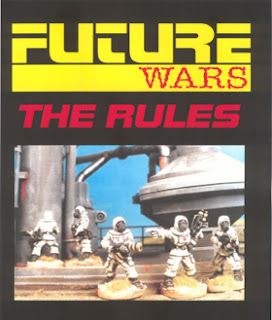 I found myself waxing philosophical this week about the future of war.

I floated an idea at a party the other night that there was no longer a need for conventional armed forces, heavy armor, mechanized infantry, amphibious landing craft, you know, all the cool stuff that makes war so much 'fun'. Sure, alcohol was involved. But it was an interesting idea to float. Do nuclear armed nations need conventional forces when going to war against other nuclear armed nations? Is fancy new military hardware like stealth fighters and stealth ships a total waste of money when the other side can just bust out a nuke if things start getting sketchy? I think I upset some people by floating this idea but that party sucked anyway.
I'm sober now and I still say I'm not wrong.
When you've got nukes, why do you need to spend money on stealth bombers and other expensive hardware?
Cut me some slack here. I'm still having fun with this idea. Soldiers, tanks, and stealth fighters do have many uses. But mostly only when going up against a non nuke nation with some resources you'd like to acquire. In such cases you can attack with impunity, overcome their primitive defenses using your advanced air force, take out their AA radar, bomb heavily and follow up with a tank rush. Soon you find yourself the proud owner of some fancy new real estate that's sitting on top of some proven reserves. This is where conventional forces come in handy.
But what if you are the US or China or the seven other nations currently with the big red button of win? China just test flew a shitty imitation stealth fighter last week and the US currently deploys 187 F-22 raptors at a cost of $361 million each. The US navy has eleven active carriers. The most recent, the daddy Bush, cost $6.2 billion to build with running costs of a hundred million per year. The US naval college recently admitted that these boats are 'vulnerable' when you introduce the new Chinese DF-21D anti ship ballistic missile into the mix. That hypersonic, satellite aimed fucker with a 2000 mile range will pick off a carrier group from space long before those carriers get their aircraft within strike range of Beijing or Ningbo. The Russians have a similar type missile. Hell, even the Iranians have a bunch of Silkworms which I'm not convinced the USN can defend itself against. 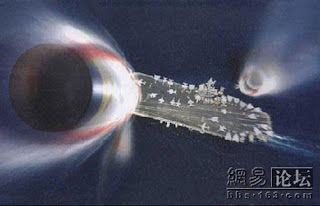 But let's suppose for a minute this weren't already true. Let's suppose, in some hypothetical future resource war versus China,  a few USN carrier groups get close enough to the Chinese mainland to launch an amphibious landing at the beaches east of Fuzhou against the 3.5 million strong PLA. For lulz, let's imagine a beach head is established. The Chinese lose a few square miles of sovereign territory. US marines are pouring ashore. Lav-25s are fanning out into the surrounding countryside to probe the enemy defenses. For more hypothetical fun, let's pretend that a good chunk of the People's Liberation Army are on a 'training exercise' on the Outer Mongolian border and can't offer up much resistance. The natural option for China is to break out the nukes. This will always become the 'natural option' when any nuclear power starts losing any conventional war. The playbook here demands two single megaton low altitude airbursts over the beach head that minimize fallout and turn all those fancy mechanized brigades to molten metal and fry everyone inside now that the losing side has decided to break out Oppenheimer's death; the destroyer of worlds.


That pretty much reduces years of sleazy military-industrial-complex design contracts to nothing in a single launch. All those billions funnelled into the 'defense' industry (more like offense industry, amirite?) are wasted. The billions of dollars spent in the production of all those high tech vehicles end up being rendered useless by a relatively cheap thermonuclear blast.

Soldiers are good for occupying captured territory. But in a war between nuclear armed powers, what former owner of the territory captured will ever sign an armistice to halt the war and accept the new boundaries before nukes get launched? Would the US, after a successful Chinese amphibious landing, give up Washington State and Oregon to the Chinese for the sake of peace? Not likely. All wars today between nuclear armed countries must escalate to full nuclear winter by default once one side starts losing. The red button of win must be pressed because it is there. We're living in a temporary stasis on the nuclear clock, it's still two minutes to midnight, just like it was in the 80s but current geopolitics have put that reality on the back burner while everyone gobbles up the last planetary resources. The grand wars for the scraps will come later.
Interestingly, with the way global nuke proliferation is panning out, a nuclear war today doesn't have to lead to an automatic earth wide Mad Max post apocalyptic zombie wasteland. There is a new and recent  alternative. The possibility of a 'regional nuclear war'. Grab the popcorn right? We're talking India versus Pakistan here. Both sides have enough megatons to glass each other's major cities. Both sides believe Kashmir belongs to them. Both sides hate each other's guts. Extremists in both countries believe a war could sort this shit out. And yet both sides still invest in conventional militaries as if a war between them  is somehow winnable WWII desert North Africa style. India conducted a military exercise entitled 'Brazen Chariot' in 2008 where they wargamed some hypothetical desert armor clash with Pakistan and won. Unfortunately, they left out the fateful third act in that battle where the victorious Indian tank divisions steamrolled over the vanquished Pakistani forces only to get vaporized by a well aimed tactical nuke.
Take that ghost of Heinz Guderian! 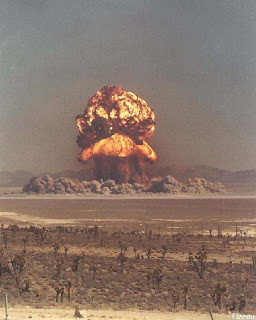 Truth is, there is no such future conflict between nuclear armed sides where one side begins losing the conventional war and hemorrhaging territory or resources that doesn't force the generals to reach for the launch codes.

So the point here is, why bother with the conventional forces at all?

The current rulers of the world are still stuck in an outmoded paradigm.

The British are broke yet have commissioned two new aircraft carriers. The Queen Elizabeth carrier is about to come online at a cost of 4 billion. It's supposed to field a squadron of F-35 stealth fighters. Those fighters are already cost over run programs from the US running into the billions. Western countries are going bankrupt while still trying to maintain the illusion of the sun never setting on their historic empires. It's hard to watch the slow and inexorable transfer of primacy to Asia. Perhaps there's a certain justice in that considering how we fucked them over in previous centuries.

War is starting to favor defenders these days. Following that old Clauswitz paradigm, an attacking force needs a 3:1 numerical advantage to overcome entrenched defenders. Today's weapon technology seems to support that. In fact, today's technology magnifies that. Build a six billion dollar aircraft carrier? I can  wreck that with a one million dollar missile. Build a twenty million dollar tank? I can waste that shit with a cheap ass RPG-29. Build an up armored Humvee? I can waste it with ten bags of fertilizer buried under a manhole.

War is getting cheaper these days if you are the defending force.

Life itself is getting cheaper these days if you are willing to press the big red button of win.