Libya: In search of a NATO victory. 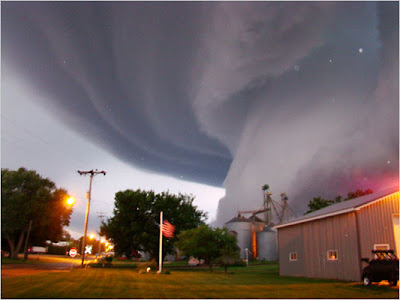 With nothing decisive happening in Libya, it's understandable that in today's instant gratification crack whore media environment, the news people would move on to the next "big thing", which in the US at the moment is a masturbatory fascination with tornadoes. Don't get me wrong, I love tornadoes. All those human interest stories of grandma getting whipped into the air by cyclonic atmosphere action get me breaking out the popcorn and laughing my ass off. Sure it's fucking terrible and people die but what I love most about tornadoes is the fact that no politician can go on TV and declare a war against them. It's pretty much accepted among us humans that nature is off limits as far as retaliation goes. Apart from chopping down more rain forest or watching 200 species of planetary whatever go extinct every day, there's not much we can do to 'combat the threat' of an existential enemy called 'the biosphere'.
Human instigated shit is a whole different story though.
If some sad sack Middle Eastern dude had planted a bomb that killed a few hundred people in Middle America where the tornadoes hit there'd be someone to blame which would make people feel a whole lot better. Just spend a few billion and blow up the the fucker's family and friends and neighbors and call it all square. 'Justice' gets done human style. But with nature the perpetrator every one of us has to admit that dying 'unfairly' is pretty much one of the hazards of being alive in the first place. A CNN reporter on scene as I write just reported that there is the upcoming threat of more 'weather'. Holy shit, is that guy serious? I mean, weather is a real bitch isn't it? It has this sneaky habit of following you everywhere you go!
Weather talk means that the media have pretty much moved on when there's nothing sexy happening in war zones. For Libya that means Geraldo is back in his river side mansion on the Hudson after dodging bullets paying a visit to the 'Libyan rebels' to give Fox News viewers a heads up when nature isn't the one pulling the trigger. But that focus means you might miss some interesting shit going down in the Middle East. And I'm not even bothered with Syria. That's just a boring internal struggle where the citizenry are up against 57 different varieties of internal security forces. Kind of like the Heinz ketchup of torture and disappearance. The guy on the street doesn't stand a chance and no foreign power is going to get involved because last time I checked, Syria wasn't a major oil exporter.
One fun bit of news out of Libya this week was that NATO destroyed Gaddafi's 'navy'. That story managed to break into the headlines because it has a positive spin and sounds like victory. But those coastal defense boats were a bunch of sitting ducks with nowhere to hide and I doubt Gaddafi cares too much. He's got bigger problems like dodging Tomahawks. Besides, they were a '"a navy in theory only", kind of like when the Kaiser rolled out his fleet at Jutland in 1916... that fleet was more useful doing nothing in port and being a 'threat' than actually doing any fighting. The problem with that strategy for Gaddafi is that he has no counter to NATO air strikes. No modern radar air defense network and nothing to stop them blowing up his shitty frigates and maritime patrol boats. What he wouldn't do for a few batteries of the Russian S-300 system eh? A few of those would have made this into a true popcorn war.

One fun thing to emerge from Libya this week was the fact that the Royal Navy are going to launch Apache helos off the deck of the Amphibious Assault Ship HMS Ocean to provide close air support to the rebels. That really shows the weakness of NATO once the US took a 'support role'. You really miss those A-10s. Tornados (not the atmospheric kind) and French Rafales just can't loiter over the battlefield providing close air support. So the British had to come up with a stop gap measure. With the UK's last aircraft carrier HMS Ark Royal decommissioned, that's revealed a glaring hole for NATO war planners. Launching ground based Apaches off a ship smacks of desperation but what can you do when you're stuck with a war you can't walk away from and Gaddafi won't die already. The term "mission creep" doesn't get anymore textbook than this.

The French too are throwing some choppers at the problem. Thing is, choppers suck. They're pretty good 'fast tanks' and give you a high attack value put they're paper defensively. Hell, in 2003, a bunch of Iraqi farmers brought down an Apache with AK fire. The British will probably use all four Apaches (damn military budgets are tight these days outside the US) at high altitude and use their 30mm Gatling guns to fuck up small bunches of Gaddafi's infantry. Like the US were seen doing in the Wikileaks "collateral murder" vid. One wonders if Gaddafi still has a few SA-6 launchers lying around for a sitting duck like a mile high hovering chopper.

One funny thing I saw used was a French "concrete bomb". I shit you not. I thought it was a joke at first but sure enough the French were dropping laser guided lumps of stone on Gaddafi's tanks. The more I thought about it the more sense it made. No explosive means no collateral damage. A direct hit on a tank is gonna flatten it like in some Loony Tunes cartoon and get sanctimoniously reported in Le Monde so the Frogs can feel how noble they are not killing civilians.

NATO has long since put to rest any pretence that murdering a foreign head of state is uncool. When "Odyssey Dawn" got started that was the official position of the US even as the British nailed Gadaffi's compound on the first night. Looks like they had the right idea if they wanted to win this thing quickly. Still, you gotta admire wily old Gaddafi. That guy is a survivor type. Reports are that he's moving constantly and trusting nobody. And his Ukranian nurse has bailed so there's nobody to 'monitor his blood pressure' which sucks for him.

Like I said before this war will probably come down to economics.

The rebels, in control of the oilfields and some key refineries on the coast, have proved they can play ball. A number of oil tankers have successfully filled up and bagged the rebels $100 million per load. It's a demonstration like this, not speeding around the desert in junky pick up trucks that truly wins you support in the Western oligarchy. All the humanitarian crises in the world don't warrant intervention unless somewhere along the line there's a chance to turn a profit. The rebels have shown that they can.

The other question now is how much cash does Gaddafi have to keep Tripoli afloat? It's a pretty big city, full of Gaddafi loyalists. At least so long as the money rolls in. So far, Gaddafi has doubled public sector and army pay. NATO has stepped up attacks on the city and bombed the fuck out of every building that ever housed more than ten soldiers. Still, blitzes like that usually just harden those being bombed London 1940 style. But NATO doesn't have any other good options. Unless they can land a bomb on Gaddafi things are just going to drag on according to the depth of his bank account. He is trying reach out to the international community in an attempt to end this shit. He's feeling the heat. His prime minister Al-Baghdadi Ali al-Mahmoudi is understood to have sent a letter to a number of foreign governments proposing a ceasefire that would be monitored by the African Union and United Nations, unconditional talks with the opposition, the drafting of a new constitution and amnesty for both sides in the fighting. I'm sure a beach side condo somewhere sunny and access to his offshore bank accounts for Gaddafi and the in-laws seems like a pretty good deal right now but I doubt he'll get it. NATO are too pissed off now and anything less than a dead Gaddafi is going to smack of a French and British failure in front of the Americans. That'll sting hard especially after the US successfully iced Bin Laden.


Of course, things are going to get nastier the longer this goes on. Misurata was ugly. But that would be nothing compared to a sustained siege of Tripoli. I seriously doubt the rebels could mount such an attack on their own but that's probably what the British Apache and 12 French Tiger helos are for. Close air support for an advance into Tripoli. Probably quite a few UK and French "Special Forces" on the ground to direct the attack. You never know how strong the castle is or how resilient its inhabitant are going to be until you try some sort of ''probing attack. Right now, it's not clear if the city would capitulate at the sight of rebels in Green Square. Baghdad fell rather easily despite the hype once the marines made it to the airport. Perhaps NATO are banking on a similar capitulation.

I wonder if the Euros have the balls to go for it.

At the very least it'd sure knock tornadoes off the front page.