Libya: Did Gaddafi school NATO in the power of professional infantry? 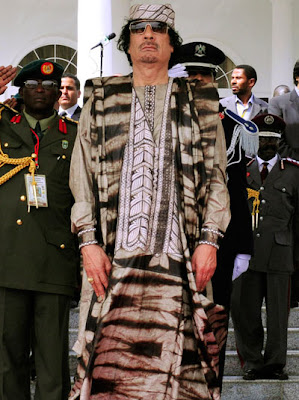 Gaddafi is quickly turning into my favorite international 'bad guy'.

Speaking of pickup trucks, I see the rebels operating two types, the ones with the DShk 12.7mm Russian machine guns or the ones with the homemade multiple rocket launchers, both weapons mounted on the truck bed. Either way, I always see them firing determinedly off camera but it pisses me off that I never get to see what they are firing at. The enemy? It's pretty risky engaging professional soldiers from the exposed position of an elevated truck bed with a loud banger like the 12.7mm. Seems to me, unless it's some kind of co ordinated attack by the rebels (which I seriously doubt) then that gunner is a sniper magnet advertising his position to every Libyan with a scoped rifle. Or it's all just posturing for the cameras.

The more the world gets to watch the rebels in action, the more chimpanzee shit gets flung at the NATO pencil pushers who got involved in this zoo. It's getting embarrassing at this stage. After Gaddafi booted their asses out of the key oil town of Brega last week, there were reports of groups of rebels firing on each other in a dispute over whose fault it was that they are all a bunch of useless idiots. This whole thing was advertised as a war movie but it's quickly turning into an '80s frat house comedy.

Gaddafi, in true evil villain style, called it when he characterized the rebels over a month ago as a bunch of malcontents and drug addicts... maybe he was really talking about their fighting style. For further hilarity, NATO and Western media were considering last week whether it would be a good idea to arm and train the rebels with some proper anti tank and anti air shoulder mounted weaponry. This is something I thought they might have done a month ago but the CIA guys that have been on the ground since before this shit started probably reported back that that was about as good an idea as placing an Afghan in the cockpit of a stealth bomber. Again, you gotta love Gadaffi's response when he got wind of this plan. He quickly floated the idea that the rebel 'army' included Al-Qaeda and Hezbollah elements which sent Western media into a shit fit. Funny thing is, it's probably true at least to the point where it's possible to be a card carrying member of an organization invented in the media. As far as Hezbollah goes, what self respecting young Arab doesn't have a serious beef with Israel?
Gadaffi again must have laughed his ass off.

Eastern Libya and its capital Benghazi have always been redneck country and the part sophisticates in Tripoli like to look down on while sipping their fancy coffees in upscale cafes. Benghazi is the city where the supporters of the former king that Gaddafi deposed in the '60s got to lay low while watching as Gaddafi funneled the oil wealth out from under their feet. They've been itching for a shot at revenge for decades. It's also home to the Islamists and the wilder desert tribes and proved fervent recruiting ground for volunteers for Iraq and Afghanistan to fight the Yankee imperialists. Those are the rebels best fighters and also the last guys you'd expect NATO to be assisting but such is the complex web of forces that guide geopolitics these days. In truth, oil makes everyone a bitch, loyalties cheap and alliances tend to shift like desert sands all so long as the proles get to fill up their SUVs on the cheap to make that commute from surburbia to their cubicle in Wageslavistan affordable.
All this does point out though, in case anyone didn't already know, the serious value of professional infantry.  Guys in uniform are a good thing. Some ancient general in antiquity came up with the idea that having all the guys on your team wear the same outfit was a pretty cool idea. And not just to prevent accidental bludgeoning and friendly stabbing but more so to instill an Esprit de Corps amongst the troops. Part of the cost of raising an army has always been the uniform and having a uniform gave the average soldier confidence that his general had enough bank to pay up when the fighting was done. Gadaffi's hold on his army has a similar dimension. With sanctions beginning to take hold Gaddafi has doubled public sector and army pay and increased interest rates to try to coax money out from under mattresses, where millions have gone since fighting started and coax it back to the Libyan central bank.
In fact, with neither side looking like it'll be able to pull off a decisive military victory, this war seems (as Gaddafi predicted) to be entering the post season and the long war phase. Here, economics comes into play and it's harder to see how Gadaffi can win this phase. He's already burning through his cash stash and one wonders how many dollars he has buried in the desert. The rebels too are running low on cash but they managed to fill a tanker over the weekend that made off with $100 million worth of sweet crude that sure helped rebel coffers. That's probably why Gaddafi wanted Brega and its oil refinery so bad, denying it to the enemy is at least as good as owning it yourself, broken though it is.
The problem with the inevitable economic victory for NATO is that it is liable to take time and not look very convincing. Waiting for Gadaffi to run out of money or for sanctions to cause food shortages in Tripoli is liable to create the type of 'humanitarian crisis'  Operation Odyssey Dawn was designed to prevent. That kind of messy victory is going to leave more chimpanzee shit on NATO's doorstep.
Still, the situation is not by any means good for our villain. A bunch of his cabinet ministers abandoned ship last week which didn't look good for Gadaffi and the morale in his camp. The most high profile defector, former foreign minister Moussa Koussa seems to be trying to play the role of 'honest broker' on the international stage and seems to think a deal can be made. Anything he can do to make himself useful is a good idea because he's facing questioning for the Lockerbie bombing and needs a favorable phone call from the MoD to get the dogs called off.
One idea that I saw floated was the partition of the country which seems pretty ugly but would probably suit sleazy western oil companies since all the oil fields are in the east and the rebels hold most of them. They've already proved they can play ball and be compliant on the oil front, having filled three tankers over the past month and that's something Western governments need to know. With oil prices hovering around the $110 mark and jittery news in America of $5 a gallon gas by summer, that's the kind of shit that crashed the economy two years ago and makes the corporatocracy shudder. And with the US consumer already broke, pricey oil will cause all kinds of commodity and food price spikes that's going to eat up every disposable dollar in circulation, leaving a whole bunch of iPhones and plastic pumpkins gathering dust on store shelves.
This is still Gaddafi's best play right now. Keep the uncertainty flowing for as long as possible and see if you  can parlay that into a sweet deal for yourself and the in-laws. Something involving stepping down in favor of a son and getting to keep the money in your offshore bank accounts. Meanwhile, churn out brutal urban warfare in Misurata while conducting hit and run raids in pickup trucks against the rebels who are sure to run like fuck and scream at the sky, demanding the magical appearance of A-10s. Oh wait, the US has scaled down air operations. Guess they'll have to rely on French Mirages or British Tornados, neither aircraft being ideal for loitering over the battlefield providing close air support to idiots who wouldn't know to take advantage of it anyway.

What a mess.
One thing is for sure, no matter how this ends, there won't be many Libyans smiling or laughing.