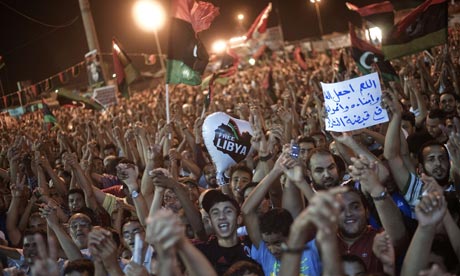 I'm sitting beer in hand on a Sunday afternoon watching footage of the celebrations in Tripoli.
NATO can finally take a sigh of relief. Odyssey Dawn just ended. Sure it took longer than expected but this outcome was always coming. In the end, the rebels basically just drove into Tripoli in their Toyota Tundra pick up trucks, parked in Green Square and declared victory. Seems Gaddafi's army had had enough. The fun thing about being in the Libyan Army is that you can just toss your uniform, grab your AK and run out on the street and celebrate the end of Gaddafi along with all the other idiots.
The BBC are reporting that Gaddafi has bailed to Algeria, a country like the US that hasn't yet ratified the International Criminal Court treaty. So that beachfront condo still might be in Gaddafi's future but probably not. They'll probably keep him in quarantine there (if that's where he is) until things settle in Libya. You never know, he might still be needed if Libya goes belly up and the rebels start massacring each other for a cut of the oil money that's going to start rolling in over the next few weeks.
Foreign power players in all this will be watching closely to see how this pans out. There are a bunch of old scores  that need to be settled and the rebels aren't exactly a unified force with a unified ideology. The murder of rebel leader Younis  two weeks ago hinted at the fact that there is a lot of simmering tension under the surface.
As I watch the crowds celebrate, there's a lot of 'democracy' talk on TV right now which is pretty funny.

Democracy is always liable to end up with unpredictable results. Especially in the Middle East.

When you give the average fucktard on the street a say in how countries get run, bad shit happens for rich people. That's pretty much why there are no real democracies left on the planet anymore. The only time true democracy showed up it was Athens in 461 BC and good old Pericles was initiating a golden age. US style democracy is all about providing the plebs with the illusion that their vote matters whilst the corporate oligarchy feeds them the information on who to vote for whilst also controlling the candidate list. Pretty fucking genius really.

Once an idea like that takes hold and becomes viral it's hard to suppress. That's why you've got protests still going on right now in Syria and Bahrain, places where protests are 'illegal'. Still, you've gotta love the idea that protesting is illegal. It's like saying the storming of the Bastille in 1789 was illegal. Of course it was. When you're at the top of the food chain everything is illegal for those lower down on the pyramid when they start rocking the boat. I wonder if Louis XVI tried to funnel the French revolution into designated 'free speech zones' a few miles from the epicenter of the Estates-General.
All hail the 'Arab Spring' right? Problem is, Egypt, despite all the hype and democracy talk is under defacto military lockdown... not exactly what all those wide eyed protesters imagined when they dumped Mubarak. So what happens next for Libya? Nothing good. Sure they get a bunch of global corporations moving in and the benefits of a McDonalds in Tripoli, but even if the country doesn't devolve into messy internecine war for resource control (NATO will back whoever has the muscle to keep the oil flowing), one wonders, say ten years out, how many Libyans will be better off than they were under Gaddafi. Sure that guy was an asshole but free healthcare, free education and the highest living standards in Africa were something a lot of Libyans had gotten used to despite the bad guy in charge.

Rebel leaders of the 'National Transition Council' boasted yesterday just before they parked in Green Square that they will have 1.6 million barrels of Libyan oil back on the market next week. Seems way exaggerated but I'm sure it makes the Euros breathe a sigh of relief. 10% of their supply is back online so it's mission accomplished for NATO even if they emerge from this thing looking not exactly convincing as a fighting force. War by commitee is always bad and taking six months to dislodge a third rate army without a modern air defense system is worse. In the end, NATO comes out of this looking weak which sure makes the Chinese and Russians take note.
One wonders now what 'democracy' will bring.
Every rebel who picked up an AK in this uprising is going to believe he deserves a piece of the oil pie. There are some real faultlines there. The Eastern rebels, those centered in Benghazi and currently sitting on all the oil refineries in Brega and Ras Lanuf are not going to let go of those without a big slice of the profits. Those eastern rebels which include all kinds of NATO undesireables like the Islamists and wild desert tribes who fought the US in Iraq and Afghanistan won't be moving anytime soon.
The Western rebels are the ones who actually drove into Tripoli and shed blood in the real battle of this war, the Stalingrad style battle of Misrata; all while the Eastern guys sat polishing the nozzles on the captured oil pipelines in Brega. They won't be so happy if the Benghazi rednecks try to hold on to those terminals for themselves. Each oil tanker that leaves port is ~$150 million in raw cash and every rebel who ever shot an AK in the air is going to want a taste of that action. It's the kind of shit people kill each other for. No real surprise there. So foreign corporate fucks and their economic hitmen will have to wait until the smoke clears in Tripoli to see if things get ugly in the post Gaddafi clusterfuck. With much of Libya's infrastructure destroyed, everyone is going to wake up in the morning with a massive hangover and hungry for a proper breakfast. With food shortages in Tripoli, NATO better hope the situation doesn't devolve into some kind of humanitarian crisis. That'd be pretty ironic wouldn't it? Bombing people to prevent death by starvation is always a little confusing so right now NATO officials must be wondering how much food can be distributed once the revenge killings get started. Or everything could go better than expected and I could just be a miserable cynical fuck. Who knows what this ugly mess will deliver? Not me.
Still, looking at brown people celebrating victory in some foreign desert seems to be popular in 2011 so I'll smile and have another beer.
One hopes there's something still worth celebrating a few years from now.
By War Tard at August 21, 2011 9 comments: