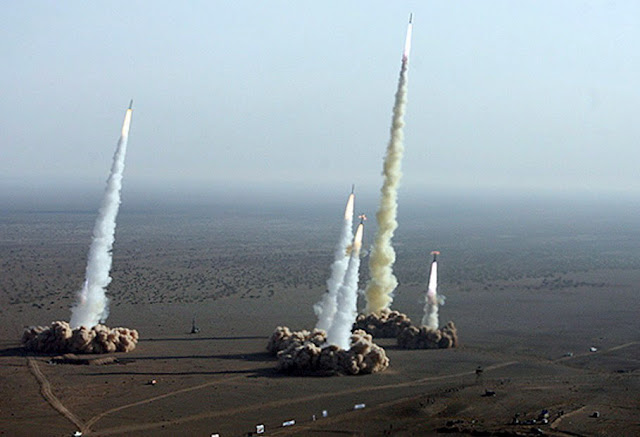 The Middle East sure is a fun zone these days. At least for those of us who derive a certain schadenfreude from watching the world burn. "The best laid plans of mice and men..." and all that jazz. But apart from the Arab Spring revolutions in Tunisia, Egypt, Yemen and Syria which are all Sunni Arab based, we tend to forget about that old faultline in Islam that Iran represents; the Shia. Iran, as the champion of this particular branch of skygod worship, wants to become a regional force in the Middle East and why wouldn't they? They're sitting on an ocean of oil and natural gas and have a population of 72 million. Tehran has tree lined boulevards and it's an hours drive to ski resorts from downtown. Mobile phone ownership per capita is higher than some euro countries. Problem is, the country is a theocracy run by a doomsday religious cult. And they're losing a war against their own young people which makes them extra twitchy.


There's nothing this Iranian theocracy likes more, other than attempting to attain regional theater parity with the Israelis on the nuke front, than trolling the same Israelis and the US with the possibility that they might have some new toys to play around with in their sandbox. Sure, the toys they'd really like to have would be some actual nukes or, barring those, a few batteries of the Russian S-300 missile system that would make any US/Israeli air campaign against Natanz orders of magnitude more difficult. But the Iranians already did have a bunch of S-300s bought and paid for until the Israelis found out about the deal last year and shat all over it before the system was delivered, scuttling the Iranian's defense gasm with some diplomatic pressure and a snarly phone call to the Russians from Hillary Clinton. The Russians just shrugged and kept the money which sure pissed the Iranians off mightily. But that's par for the course in the sleazy world of international arms deals these days. I still wonder what kind of pressure the Israelis put on the Russians not to sell the Iranians that SAM system but then again, Israel has a sizable Russian population, so I'm sure there were plenty of phone numbers to speed dial in Mossad's little black book.

The first Iranian nuke underground test is still years away. The US and Israel made sure of that when they deployed the Stuxnet computer worm against Iran's shitty computer system earlier this year. That sure was a kick in the nuts to Iran's nuclear ambitions and has delayed them by at least an extra year and barring a North Korean document dump, it'll be at least 2015 before there's a Shia nuke and the "big red button of win" ends up on the Ayatollah's desk. As I've said before, an Israeli air strike on Iran's nuke facilities would be the ultimate popcorn war but the Israelis found a cheaper way to delay that program. They basically hacked the Matrix and 'uploaded a virus' into the Iranian's 'Pentium II" that blue screened them hard and now they have to go and buy a whole new computer non Windows based system. This plan sure worked out a lot cheaper for everyone than a bombing mission.

But the Iranians are still pissed.

And looking for ways to piss off the West.

It looks like they found a new way this week. The State News Agency just reported on 10 days of Iranian war games called ''Great Prophet 6" (apparently the first 5 prophets were just mediocre) and splashed some dick waving pics of their brand new 'missile silos', large holes in the desert that can withstand an airburst and chuck a Shahab 3 (range 1200 miles) back at Israel or US bases in the Gulf in the event of an  air strike on Iran. Thing is, missile silos, while nice and all, are primarily defensive weapons that hark back to the '80s and the heady days of the Cold War and Defcon 5. Obsolete in some ways, a lot of silos in the US have been converted into post apocalyptic survival shelters where rich Wall Street types can buy a berth and sit back after civilization implodes (any day now surely) while the rest of us plebs massacre each other for the last can of chicken soup in the looted Seven Eleven. Some Iranian colonel went on Iranian State TV and stated that the silos "function as a swift reaction unit" meaning the missiles are always in a vertical position with the co-ordinates of Tel Aviv locked in. That is, of course, if Stuxnet hasn't fucked with them too and makes the Kebab 3s U turn back to Tehran soon after launch.


But that right there is the purpose of these missile silos. To show the US and Israel that if Iran gets bombed, no matter what, we Iranians are going to get to launch at least one reciprocal strike and you don't know where those missiles will go. Could be Tel Aviv. Could be Saudi Oil terminals. Could be US bases. The point is they can make an attack on Iran costly and the outcomes unpredictable. Not least for the global economy which is basically the "oil" economy.
Right now, the location of these silos is obviously secret (Abriz and Khorramabad in northwest Iran) but I'm sure any prospective US air attack on Iran will first involve a quick Pentagon scan of Google Earth to find them. In a world where you've got satellites that can read your golf ball from space, hiding stuff these days is tricky. Still, this is an advance from an Iranian point of view. Previous iterations of the Shahab 3, a liquid fueled piece of Iranian tech that can hit Tel Aviv, were all mounted atop dodgy looking mobile platforms with dozens of wheels that looked like something from Gerry Anderson's '60s era kids TV series "Thunderbirds". Another unidentified Iranian officer told state television that “only a few countries in the world possess the technology to construct underground missile silos. The technology required for that is no less complicated than building the missile itself.” That's a bit of a fucking stretch. I mean any country with a decent subway system is already half way there and that just leaves a few technical issues like venting the propellant gasses, rolling open the blast doors and on which floor to stash Dr Strangelove's wheelchair.
The Iranians really would like to up the ante as a regional player in the Middle East. It really pissed them off in April when the Saudis marched into Bahrain with tanks and started slapping around the Shia protestors there because they make up 60% of the population and suddenly wondered why they can't vote. That's a legitimate beef but went largely unreported in Western countries where it pays to keep your mouth shut about the Saudi's incase they tighten the nozzle on the oil wells to remind everyone whose boss. That would hamper the "economic recovery". Those Sunni Arabs sure do suck up to the Zionists and the US from an Iranian point of view.  The nut job theocracy in Iran wishes for the days when Babylon had Hanging Gardens and streetlighting and everyone feared their elite unit, the Immortals. The only way the Iranians feel they are gonna get some respect these days is if they can slap a nuke together, nukes being the modern elite unit. It's pretty funny the way they keep denying they want one, conducting numerous "talks" to stall the Euros and Turks and Russians with bullshit while sending a bunch of dipshit diplomats to act innocent in front of the world's TV cameras and swear on their momma's burka that they have absolutely no interest in the 'big one' but instead just want a little taste of nuclear fission for electricity generation and 'medical purposes'.
Still, you could forgive Iran for wanting a nuke.
The Iranians have noticed that when you get named a member country of the "Axis of Evil" possibly the best way to maintain sovereignty is to fast track some uranium into something blowable. It worked for North Korea. Iran figures, since it's surrounded on all sides by Americans, maybe the only route to autonomy and stopping the Americans grabbing your oil is a nuke. Another thing a Persian big one will do, is stop the Sunni's acting against Iranian proxies like Hezbollah in Lebanon and Syria (assuming Assad manages to massacre enough people to stay in power). Pulling those under an Iranian nuke umbrella would sure tip the balance of power in the Mid East to the Shia and have the Saudi's racing to get their own centrifuges churning.

The IAEA said a few weeks back they had evidence that the Iranians were working on 'nuclear triggers', you know, those complex devices that fit in suitcases and usually make an appearance as McGuffins, important plot points in Bond and Bourne type spy movies. The report said it had asked Iran about evidence of “experiments involving the explosive compression of uranium deuteride to produce a short burst of neutrons” — the speeding particles that split atoms in two in a surge of nuclear energy. The Iranians apparently just nodded sheepishly and promised to get back to them on that one.
The I.A.E.A.’s last comprehensive report, issued in February, listed seven outstanding questions about work Iran had conducted on warhead design. The documents in the hands of the agency raise questions about work on how to turn uranium into bomb fuel, how to cast conventional explosives in a shape that can trigger a nuclear blast, how to make detonators, generate neutrons to spur a chain reaction, measure detonation waves and make nose-cones for missiles. Obviously, Iranian scientists have been googling this shit like crazy for ages but so far the jury is out on how much they do know and how long it'll take before they can translate that shit from the North Korean. It seems the blue screen of death Stuxnet worm has run its course with reports out of Iran's main facility at Natanz saying it's enriching uranium at a slightly faster rate than before Israel forced them to buy a whole new computer.
Of course, if all this doesn't work out, the Iranians are busy working on their next dastardly plan sure to piss off the US and Israel next month. Tehran just announced its intention to fire into space in early July a Kavoshgar 5 rocket piloted by a monkey. I shit you not.
The first Iranian monkey in space is sure to piss off the capitalist pigs.
Lucky little bastard.