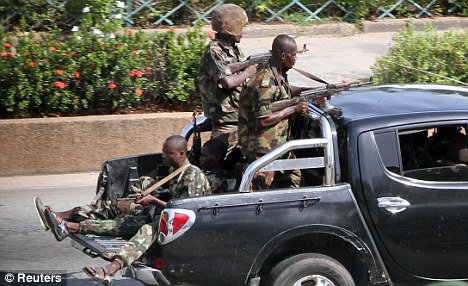 In the vintage year for war that 2011 is turning out to be, Ivory Coast's is turning out to be a minor dust up. Like I've been saying for a while now, it was just a matter of time before this shit went live. With news today that 800 civilian bodies were found in the western town of Duekoue, shot and hacked up with machetes, seems this war has finally got its shit together. Of course, both sides are blaming each other for the body count. But that's pretty much par for the course when genocide is in play in Africa; both sides are willing to play the game but no side wants to be caught standing with blood on their hands when any particular round of media musical chairs ends.
You can't really call this a proper war though. Not when one side, in this case that of former president Laurent Gbagbo, the president who refuses to step down after losing last November's election, doesn't seem like he has the stomach for a proper fight. Gbagbo's army put up almost no resistance to the UN and IMF's man, Alassane Ouattara, whose forces seem to have marched right in over the last few days and taken 80% of the country with almost no resistance.
That sure had me scratching my head.
Seems a lot of them saw the writing on the wall and stayed at home. Even Gbagbo's chief general and head of the army, Phillippe Mangou, took refuge in the South African embassy with his five children. By mid afternoon on Friday 50,000 soldiers and cops had abandoned Gbagbo. Although there has been constant gunfire in the capital Abidjan and fierce fighting, Ouattarra's men have already taken the presidential palace and a bunch of them slept in Gbagbos bed. When you lose your bed, you know the war is pretty much over for you. Still, there's no sign of Gbagbo.
This Gbagbo guy sucks majorly.
Seriously, he should win some prize for the worst defence of a country ever. Was he really that clueless that he didn't realise a large chunk of his army would surrender at the first sign of trouble? Actually, probably yes. That was why he was running a little mini Hitler Youth recruiting drive over the past few weeks and handing out AKs to angry teenagers with tribal grievances and calling them the 'Young Patriots'. Nothing like tapping into the old colonial divisions and ethnic fault lines when you need a fog of ultra violence to hide behind. He also has about 2,500 troops of the 'Republican Guard' (think hometown tribe who you've been funnelling chocolate profits to for the last ten years, much like Saddam's Ba'ath buddies in Tikrit) and it looks like they are putting up decent resistance in the capital Abidjan; prolonging shit to at least save some face. Gbagbo's forces have also managed, after conflicting reports, to retain control of state broadcaster RTI where they've been playing tape on a loop of last November's election 'victory'. There are also reports of a dishevelled Gbagbo news guy showing up impromptu and claiming the station had been attacked by the UN "assisted by Guinean, Malian, Senegalese, Beninese and Burkinabe mercenaries", which seems to me to be an attempt to stir up tribal tensions and get the wider genocide ball rolling.
The problem right now for the international community is they are not giving Gbagbo a way out. With resistance in the capital proving more stubborn then they expected (understandable after you've captured 80% of the country so easily in a matter of days), the longer this goes on the more destabilizing it can get. Just like in Libya, you need to float a decent escape plan for the designated 'bad guy'. But with the International Community floating the idea of indicting Gbagbo for 'crimes against humanity', that pretty much rules out the villa in the south of France and access to his inevitable offshore bank account.
What I don't get is if Gbagbo had some inkling that his guys were going to surrender so miserably? If so, then why not make a deal while he still had a decent amount of chips left on the table? My guess is the guy's a retard surrounded by yes men who were trolling the fuck out of him. Did Gbagbo really know his chief general, Mangou, was such a pussy or was he just that clueless? Of course, I have no idea but it makes for a comedy sketch that goes something like this:

INT - President Gbagbo's HQ - Evening, a week prior to Ouattarra's attack.
President Gbagbo is reclining in his armchair, smoking a cigar while a hooker smokes his 'other cigar' under his sprawling mahogany desk. He has requested an audience with his chief general, Phillippe Mangou, in order to assess the readiness of his army for the upcoming war.
Gbagbo: So how are the troops, General Mangou?
Mangou: They are fabulous el presidente.
Gbagbo: And how do they feel about that $20 a month raise I gave them.
Mangou: They are really pleased with it sir. Most of them bought another six pack with it.
Gbagbo: SIX PACK!?
Mangou: Yes sir...it's an erm... extension for the magazine cartridge on their AKs.
Gbagbo:  Ah that's the spirit! I like dedication like that. For a second there I thought you meant the men were drinking!
(Nervous laughter)
Mangou:  Drinking? Why would they do that? Granted, with the UN, the IMF, the African Union, ECOWAS, the World Bank and the International Community breathing down their necks, the men might need to steady their nerves a little.
Gbagbo: True. That's true. (Gbagbo begins signing papers on his desk)
Mangou: What are you doing el presidente?
Gbagbo: I'm increasing the army's chocolate ration. Nothing makes men want to fight like Hershey and Snickers bars!
Mangou: Good plan... good plan! (muttering to himself) That'll work retard!


This war is pretty much over already. Gbagbo has failed to get the genocide ball rolling and his forces will soon be running out of ammo. Still, Ouaterra has a lot to lose here if he doesn't play his hand carefully. He's been offering Gbagbo multiple chances to surrender. This is presumably to try to avoid a high body count which tends to put a dampner on your swearing in ceremony. It also makes all that foreign money that's bankrolling you nervous. These foreign interests just want business to settle down nicely and the economic rape of Africa to continue on the down low as it has done for centuries. Ouattara knows the game since he was an inside man at the IMF for much of the '90s.
So everything should work out better than expected for the economic hitmen.