Who won this war? The longest war the US has ever fought on paper (20 years). It even beats out Vietnam for long drawn out attrition against an enemy, despite modern weaponry, against an enemy that resisted defeat. For the Taliban 'resist' is the operative word. Hide. Use forbidding terrain. Manipulate the local population. It was a very Viet Cong and NVA strategy and it somehow worked in the rocky moonscape desert of Afghanistan just as successfully as the jungles of South East Asia. All that 5th generation drone tech, satellite surveillance, state of the the art air support did not win the war for US forces.
And now the retreat is humiliating not because The United States military displays weakness to its enemies but because the US has now demonstrated weakness to its friends. A defeat and a surrender (which in good faith Trump signed in February in 2020 in Doha) was at least an end to conflict. A conflict that could not be won. Biden tore it up.
Yet this is not a red v blue situation. The US government is a monolith. Voting is a nice idea for the plebs but if it ever changed anything then they'd... do something else so long as it was saleable as "freedom". And when there is only one opinion you fall into a black hole of opinion...
Probably with an agenda in mind, the craven US media accidently  conducted a recent interview with a Taliban spokesman. One look in his eyes and you could see that this person was a high IQ individual and the US interviewer a mere shill for AP and Reuters news wires. But his answers and demeanor spoke volumes for those with eyes to see.
That look in his eyes when Bin Laden was mentioned.
What he knows and the world knows is that Bin Laden was a CIA Asset working with the CIA and the Mujahedeen against the Soviets when they invaded Afghanistan is the 1980s. He was their boy. Like Colonel Trautman in First Blood, the local police in the hick town didn't know what they were dealing with. In warfare, I'm a big believer in leaving people the fuck alone. Even if they treat their women like shit and throw gays off whatever their version of the Tarpeian Rock is; at the end of the day, it's none of the West's business. I'm sorry you were born in a shithole but sometimes, you've got to play the hand you get dealt. 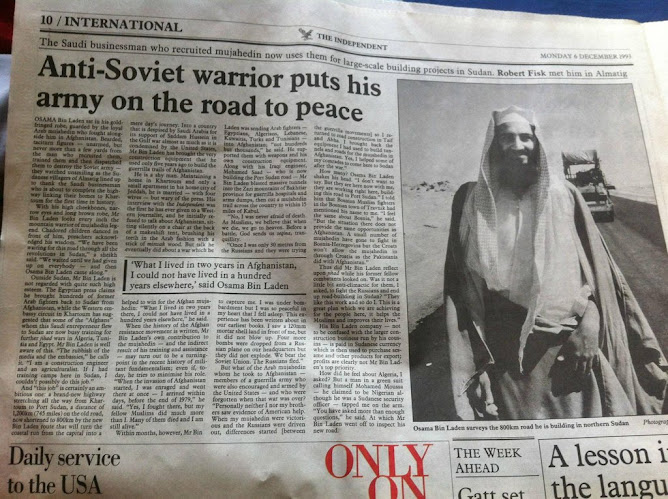 Bin Laden was a CIA asset. This is known.
How it became the West's business was in the wake of 9/11 when US neocons were given carte blanche to do whatever they wanted is interesting. And boy, did they want a lot. Here we are twenty years later and still watching a shit show that should have ended by January 2002 after a few million tonnes of B-52 payload. But it didn't happen that way. The opium trade was just too juicy for black ops cash. Next time you're in the ER after breaking your arm watching Porn Hub, just know that pain shot came from the miserable moonscape of Afghanistan. And yet 2 trillion dollars later and 4000 US soldiers lost and who knows how many Afghan's dead, what has been gained? The problem with fighting in "the gravetard of empires" is that it continues to be, no matter how much tech you throw at it, a graveyard of empires. The Russians tried it in the 1980s and left with a very bloody nose that soon later lead to collapse of the USSR. The British tried it and failed as Kipling said not so eloquently in a poem more than one hundred years ago...