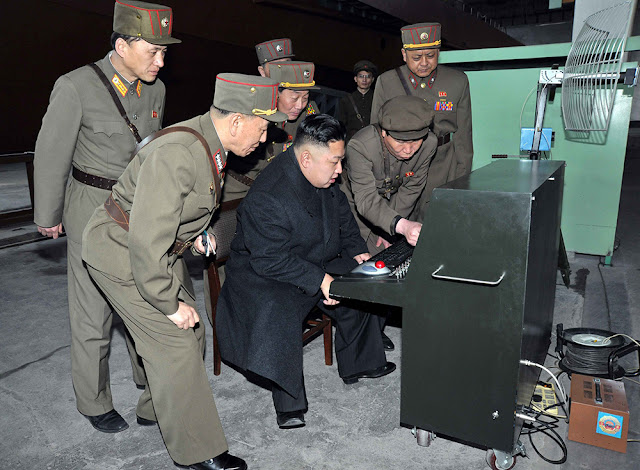 The real question Western war planners have been asking since the Korean Armistice in 1953 and especially in the years since the demise of the Cold War and rise of China has been:

How much incoming artillery can Seoul take?

Because that's the cost of any war on the Korean Peninsula today.

For all of the North's bluster the real calculation comes down to a very simple equation. At what point in the cost benefit analysis does the price of appeasement (food, fuel, tech and free HBO for Kim Jong Un) become more expensive than patching up Seoul after a NK artillery and rocket bombardment? To use a crude metaphor, war on the Korean peninsula is a lot like you stepping in dog shit on your way to a party. You've got two choices, wipe it off in public or let everyone deal with the smell. The question here, and bear with me here for a sec, is, who wins this clash of opposing realities; the dog shit or your shoe?

In many ways, the answer is no one.

For war planners right now, North Korea is the dog shit. It's just far easier and cheaper to avoid war on the Korean peninsula than win. At least, that's the conventional paradigm that held true during Kim Jong Il's 17 year reign. Western media portrayed Kim Jong Il as a crazy, lonely leader with a penchant for Hennessey, Bogart movies and nukes but omitted the fact that being crazy was the only card he had to play; dealt to him in a pretty shitty poker hand after the Cold War ended and NK lost the Soviet Union as a benefactor. Bluffing his way through the game on two pair got him oil and grain and street cred and there was always the chance he'd go full retard anyway and do something really crazy and launch something significant. Sure, that'd mean his regime's instant demise but the idea behind cultivated crazy is that you just might do it... because you're crazy.

Crazy buys you leeway and means you don't have to operate under normal "rules".

His son is trying to play the same hand but doesn't seem to understand that the house rules have changed. For one thing, China is sick of North Korea's shit. They just want to keep exporting Wal Mart inventory and soaking up bank and any war on the Korean peninsula will dent cash flow. Also, it'll mean an influx of destabilizing starving NK peasants flooding across the Yalu river into Dan dong which will be very bad for business.

China no longer knows how to deal with this war.

So, like everything war wise at the moment, it's left up to the Americans to figure it out.

Meanwhile, the South Koreans have done their own cost benefit analysis and are approaching a tipping point. The tipping point where putting up with North Korea's bullshit might not be worth it anymore. With a functional nuke in the mix, it's only a matter of time before real and permanent damage could be done to Seoul and the South Koreans are beginning to total up the possible losses today versus say, three years from now, and suddenly they're realizing that it might be cheaper to take the horrible tasting medicine today and let the air strikes begin. The alternative is North Korean nuke hegemony not only in the Pacific Theatre but 40 miles north of their fabulous and gleaming gangnam capital. That's so destabilizing it makes international capitalism shit a gold brick. Of course, the theory that South Korea can retalitate to provocation only works if the Chinese and US are onboard and we're probably not at that point. Yet. But one thing is for sure and that's that the South will not sit idly by if the DPRK bombards an island or torpedoes a corvette like the shit they pulled on the Cheonan in 2010.


The US, for their part, would like this to go away. One thing you've got to say for the Obama administration is that they play a smart game when it comes to conflict. Unlike Bush. They are a bunch of smart nerds who play a mean game of Civ II and they'd like a pragmatic result which would be cheap, non messy and non confrontational. This, ideally, would take the form of North Korea collapsing all by itself (something which can happen but will take time) and is itself a risky gambit because it seems all of this North Korean belligerence is driven by internal pressure among the country's elites sensing the end of the gravy train. The problem with further appeasement and stand off soft pressure is that it is likely to lead to a shooting war anyway.

This war is starting to enter the realm of possibility and it may be time to grab the popcorn folks.

Just don't microwave it yet. I'm still not feeling this war. The North Koreans do self preservation pretty well and if the shooting starts it will only be because of a fundamental misunderstanding of the situation on their part. The failure of their society and the internal pressure release valving among their elites is pushing Kim Jong Un, the young neophyte, into crazy territory and that's the kind of mistake failed states make. The bubble you're in distorts the image of the outside reality to the point where pulling a trigger becomes a viable release. If they fire a missile at the wrong place it'll be up there with Gallipoli or, more pertinently, Mac Arthur's failure to properly assess the DPRK's intentions when they invaded the South in 1950 and the Chinese human wave follow up across the Yalu River that hammered the US 8th Army that November.

Of course, if the trigger gets pulled, this war will be over very quickly. Nothing I've said before about this war changes. The DPRK, despite the media reports on active troop numbers will crumble faster than Saddam's forces in Gulf War I. All that crappy Warsaw Pact era equipment will evaporate to precision weaponry in days and counter battery fire from the South will pin point and neutralize NK artillery north of Seoul pretty damn fast. The only costly part would be having to occupy and take Pyongyang because who wants it?

Again, it's all a matter of just how much damage Seoul is willing to take in the initial bombardment.

The real question I heard somebody raise a while back is the moral issue that North Korea presents.

Remember that argument, often made, that if the Allies really knew (which they did) about the Nazi concentration camps, why didn't they try to do something about it? There are plenty of examples of prison break missions in WWII, like say Operation Jericho, and the question often gets asked as to why the Allies didn't try something similar when it came to the death camps. Sure, there are truckloads of reasons why that wouldn't have been a sound military operation but military history is a fickle beast prone to hindsight.

And yet in North Korea right now you have all the conditions present for pre emptive war that were not present when the US air dropped a few trillion into Iraq. If Western democracy and specifically the US and UK want to hold true to the 21st century  "bring democracy to the oppressed peoples" narrative they themselves established, then the fair question is, "where will you find a better candidate?" Of course, being realistic, that just means that TV talk and total media saturation is just high penetration bullshit. We already know why not. Still, if the world had principles (if it ever had), 'pre emptive war' would make sense outside of Middle East deserts.

North Korea sure checks the box on this. Right now, Iran is being sanctioned to hell by everybody and they don't even have a capable warhead. Meanwhile in North Korea everyone is handling those assholes with kid gloves. Sure, China needs to give the go ahead but they weren't too excited about Iraq either. The reason this is not happening is because they've got nothing anybody wants and the cold hard facts of conflict are that nobody goes to war for free; they go to war for resources.

2) Get rid of an evil regime and bring "democracy" to the oppressed people. (The moral imperative).

North Korea has death camps. North Korea has slave labor. North Korea is like Saddam Hussein's Iraq on bath salts. And yet nobody gives a shit all of a sudden. Why? Probably it's down to strategic resources, China's proximity and Pacific Theater strategic concerns but let's face, when you cut through the bullshit of war and war's alarms, intervention on the Korean peninsula still fails the cost benefit analysis.

3) The aftermath of North Korea's 'liberation' would not be pretty. Especially if delivered via foreign weaponry. That's 25 million people switching hard and fast to the 21st century. It'd be on par with teleporting a bunch of  Mayflower Pilgrims to Times Square in 2013. It's going to look like hell multiplied by Jesus divided by where the fuck am I?

It's not gangnam style.

And nobody wants to pay that price.