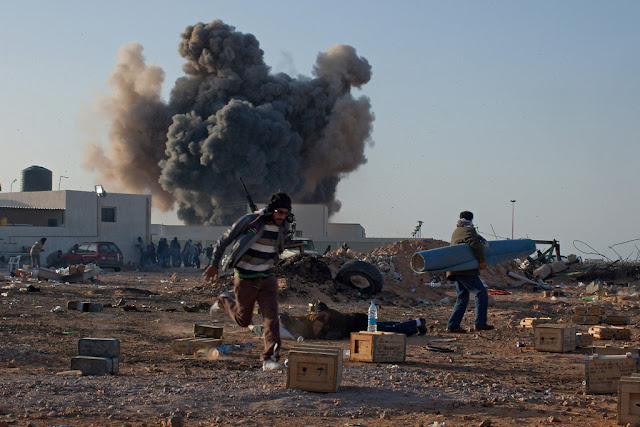 While the West adjusts its knickers and tries to figure out how best to play its hand, Muammar Gaddafi has staged a successful attack on the city of Zawiyah 30 miles east of Tripoli with up to 50 tanks and a shitload of Toyota Tundra pick up trucks from the 'elite' Khamis brigade led by his son. Zawiyah, a city of about 200,000 and right in Gaddafi's back yard, was a thorn in his side and it's pretty logical that he would aim to 'cleanse' that first. The shelling has been pretty indiscriminate (as shelling always is) and it seems his forces have taken out power to the town. Cellular and land line phone communications have been cut which I'm sure is making the rebels jittery. There are reports of them using bullhorns to try to rally men to the main square where they seem to have some makeshift HQ. The town has been surrounded and cordoned off by loyalist forces and anyone attempting to escape is getting sniped on the highway.
If and when Zawiyeh falls things are going to get interesting because the country will fall into an almost perfect east-west divide. With NATO offshore fanning their pussies and still wondering if the imposition of a 'no fly zone' will harm or help the rebels, Gaddafi's forces seem to be strengthening. The 5000 troops he's paying to stay loyal seem to have been bolstered by a few hundred Tuareg warriors from Mali and Niger. These 'blue warriors' are Saharan tribesmen Gaddafi helped out when they rebelled in '07 in Mali and now seem to be repaying the favor at the price of a mere grand a day per warrior.
Don't you love this shit?
In the east, Gaddafi's air force has been messing with the oil refinery in Ras Lanuf and dropping the odd bomb to mess with the rebel's heads. It also makes sure no more oil tankers make off with any more loads like the two that managed it last week. Gaddafi's forces also repelled a balls to the wall rebel attack on Sunday when a bunch of fools in pick up trucks attempted to advance on Gaddafi's hometown of Sirte only to get pawned by arty and heavy weapons. They returned to base with heavy casualties and Gadaffi loyalists were seen celebrating in Tripoli on news of the victory. The momentum shift now is interesting as suddenly both sides believe they can win.

Without some NATO weaponry or fire support it's difficult to see how the rebels in pick ups can bring it to Gaddafi. And with Gaddafi seemingly gaining the initiative, a push to the east with armor toward Benghazi seems inevitable if Ras Lanuf falls. There are reports that the rebels in Ras Lanuf are running low on fuel and ammo, not suprising when you consider every time a jet swoops overhead everyone and their mother opens up with their AK. Let's face it these guys are not professional soldiers by any means just a motley bunch of guys who've been cut out of Libya's economic pie all their lives. Born into the wrong tribe or social group this is their chance for a better shot. Problem is, heart and enthusiasm can only get you so far in war. And with no heavy weapons and under arty and rocket fire guys like that tend to buckle when enough of them end up on stretchers in the hospital ward that has no electricity or doctors. They've got no command structure. Or discipline. There are reports of disparate groups of them arriving in pick ups in Ras Lanuf, driving west to wherever they believe the 'front is', firing a few shots in the general direction of Gadaffi's forces and going for a cigarette break.  If Gaddafi can capture Ras Lanuf you could see the rebel forces crumbling and making a break for the Egyptian border with all the mess that would entail, last and not least of which would be Libya's oil off the world market for the next ten years with Gadaffi back in charge and the 'terrorist state' the West always claims it is so terrified of becoming a reality in the heart of North Africa.
Of course, if NATO does intervene, and with Gadaffi's gains it needs to make up its collective mind, that'll have wider implications all across the Arab world. There will be clamoring voices in next door Egypt saying it is an imperialist oil grab which will push that new 'democracy' into the hands of hardliners and risks handing the country over to the Muslim Brotherhood. Having them in control of Suez is a nightmare for the US Navy who needs that waterway as part of its Persian Gulf strategy. Interestingly, the crushing of the rebellion in Libya would be seen in Saudi Arabia as a bonus and might put a dampener on Friday's upcoming "Day of Rage". When one side has all the heavy weapons, maybe Facebook and Twitter aren't enough to win a war after all.
Interestingly, there were reports yesterday of Gaddafi floating an exit strategy for him and his money. Although later denied (you always deny it until you're safely aboard the plane to your beach front condo), it seems Gadaffi would bail if he and his family could get immunity with no pesky war crime trials and get to keep their money. That hole is pretty deep now and it's hard to see the West being cool with this especially since all those shiny oil investments are now dust.
Probably the best bet right now for the West is to slip in some covert 'military advisors' Vietnam style and train some rebels to use the Javelin Anti Armor system and FIM-92 Stingers to take down Gadaffi's aircraft. But even then, it's hard seeing that motley bunch having the command structure to put them to good use. Sure any move by NATO like this would be obvious but certainly a quieter move than imposing a no-fly zone that'll have the rest of the Arab world screaming oil grab or Zionist plot.
The thing is, with Gadaffi gaining the initiative, the West will have to make up its mind very soon if it wants to act, because if the rebels start losing ground a "no fly zone" is not gonna cut it (Gadaffi's airforce not being the rebels main problem anyway and NATO will be forced to take out Gadaffi's arty and armor just so the rebels can hold real estate.

And that is not going to viewed favorably in the wider Arab world.
By War Tard at March 08, 2011 8 comments: 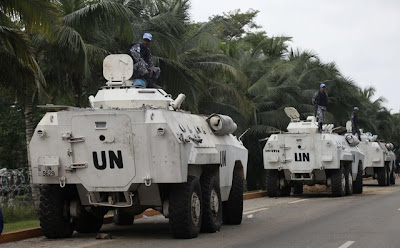