Are the TSA and airport scanners proof that the terrorists have already won? 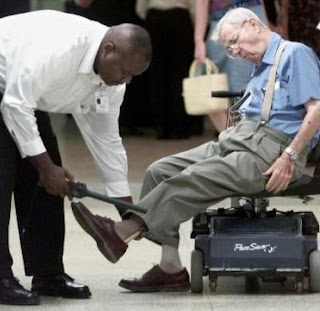 I was watching a video of some guy on YouTube who'd left his camera running while getting TSA screened. The guy refused to let the TSA guy feel up his balls the standard four times. Neither did he want to get irradiated in the 'isolation chamber' where TSA agents get to see you naked. He just wanted to be like all the other passengers who hadn't been singled out and gone through a standard metal detector test. Because he didn't submit to sexual molestation or naked scans, he wasn't allowed onto the plane. However, this guy was ballsy in the way most people are not and stood up for himself by posting his shit on Youtube and declined to board that flight. He grabbed a refund from the airline which really pissed the TSA off.

And that's when it happened.

I had a 'Kurtz like Apocalypse Now' moment, a realization, like a diamond shot into my brain, pure, crystalline, clear... and I realized the horror of what's happening in modern America.

The terrorists have already won!

If Bin Laden is alive in his mountain fortress he must be high fiving his guys like crazy. He was indeed right. He was indeed playing Jenga and he rightly predicted that all it would take was the removal of one block and the US would freak out and lose the game all by themselves. 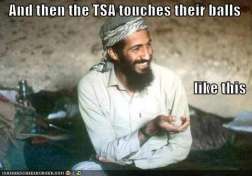 Then I got to wondering, on a purely cost benefit analysis, could 9/11 be the most cost effective military operation in the history of the world? Seriously, I love me my 'asymmetrical warfare' but I can't come up with a similar type economic victory in history where the ratio of the cost of the operation to the economic damage inflicted was so skewed.

I mean, there aren't any examples in terms of scale. The U-boats sunk 1.6 million tonnes of British shipping in six months in 1940 which is a decent return on investment for the cost of a few torps. Still nothing on the scale of 9/11 though. The 9/11 Commission came up with a figure of $400,000 for the total cost of the terrorist operation and that's including pilot training, accommodations for the hijackers, money blown at strip joints the night before, car hire, Home Depot bought 'box cutters'.

Now let's look at the return on that investment. First off, the US government created the boon doggle that is the Department of Homeland Security. (That word "homeland" still freaks me the fuck out and sounds too much like the 'Fatherland' uttered by B actor Nazis in the war movies I grew up on in 70s. Only the 'bad' guys say shit like that). Anyway, DHS has cost the US 250 billion by 2010. Throw in another $750 billion air dumped into Iraq and $370 billion pissed into the winds of Afghanistan. That's conservatively $1.37 trillion dollars for a crappy investment of four hundred fucking grand. Doing the math on that cost benefit analysis, that's a 1:2500000 return on investment. The fucking German U Boats aren't even in the same ocean.

9/11, the greatest military victory of all time.