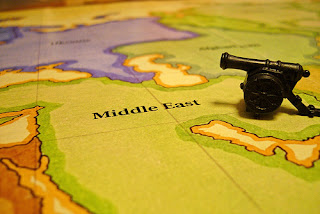 Yes, there are a shitload of hypothetical contenders for every one's favourite future war. I mean who wouldn't want to grab the popcorn and watch a nuclear exchange between India and Pakistan? Obviously, no sane person. That's why potential regional nuclear wars are not that much fun. All the fun war stuff happens before the last resort nukes get launched. Those fancy infantry maneuvers, tank thrusts, strategic interdiction by air forces, all that good stuff gets nullified when the generals start losing and resort to the big red button on their Strangelove desks. Wiping out a few million civilians in major population centers is a pretty shitty way to win an otherwise 'fair war'. Personally, I prefer something with a little more panache, you know, that war we all crave that's got old school Rommel maneuvers like Arras or Gazala. But pure war like that just doesn't happen much anymore.
To make my favourite war list it must be global and realistically has to involve the US or Europe for true wargasm. Obviously, the best hypothetical war that never happened is the clash between the Soviets and NATO in the Fulda gap in 1988. I was a teenager back then and shat my pants going to bed every night wondering if it would ever happen. The Berlin Wall fell a year later and the world got all misty eyed. We were supposed to believe that a world without war was possible from then on because the Russians had run out of money. Stupid humans thought a new war free age had dawned and the human habit of killing themselves for fun and profit had gone away. That vicious rumor lasted about a year and then Gulf War I happened.
So what's my favourite war that hasn't happened yet?
Here's a hint. It's a war that starts in the Middle East. I hear you laughing. Yeah I know, every major future war is going to start in the Middle East. Well this one will be US/Israel v Iran. It's the most fun war that could happen right now. It's got so much potential. Though this war will lack cool panzer battles and will involve no ground campaign at all (except perhaps for an Israeli 'defensive' attack on Southern Lebanon against Iranian proxy Hezbollah), this war will initially be an air campaign followed up quickly by all sorts of asymmetrical goodness that has the potential to spread like wildfire, destroy what's left of the world economy through oil supply disruption and possibly ignite WWIII.
Before we examine all the fun war stuff, let's take a quick look at the history of the two potential combatants.
Israel's history is pretty much well known since 1948. After the Nazi horror the world's Jews finally had gained enough political clout and enough world sympathy to undo the diaspora started by Vespasian's legions when Rome sent him to break up the Jewish revolt in 66 CE. I could give a shit about questioning the politics of who owns the land the Romans once called Judea. The fact is that the world has agreed to call a small swath of the Mediterranean coast 'Israel' and that is good enough for me. I only care about the fireworks.
Speaking of which, the Israelis own some serious military hardware. I mean for a population of 7.5 million, the Israelis are ranked 11th in world military strength. That's serious overachieving. They've got mandatory military service for men and women and, I suppose, who wouldn't when you're surrounded by a few hundred million Arabs who'd like to Zyklon B your ass. Also, the Israelis have 200+ nukes which makes them non 'invadable' and gives them regional 'theatre dominance' in any potential conflict with their Arab neighbors. If the useless Syrians and Jordanians and Egyptians all tried a rerun of 1967, and, by some stretch of the imagination overran Israel by acting in concert, that would force the Israeli generals fingers to the single red button of "win" that wipes out Cairo, Damascus and Amman. 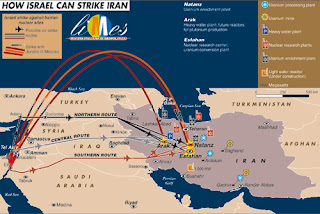 Actually, that's the crux of the problem for the Israelis and why they don't like Iran. It's all about 'theater dominance'. Iran wants their very own big red button of win. Why must there be a war in this region? Because the Iranians, a country of 72 million people, are working like fuck to centrifuge enough uranium into fissionable goodness. They need that red button fast and for pretty good reasons. The Iranians have noticed that when you get named a member country of the "Axis of Evil" possibly the best way to maintain sovereignty is to fast track some uranium into something blowable. It worked for North Korea. Iran figures, since it's surrounded on all sides by Americans, maybe the only route to autonomy and stopping the Americans grabbing all your oil is a nuke.
They are being sanctioned to shit for daring to think this way.
Currently, American foreign policy is to support Israel. That includes filling out her air force with F-16s, F-15s and a secured future order of over 100 stealthy F-35 Lightnings. The Israelis also have a nice amount of American Apache helos but these are obviously useless for any campaign against Iran.
There's also a time factor built into this equation. The Iranians are probably at most 2 years away from having enough gunk cobbled together to set off their very own big one. If and when they do, Israel will have to play ball and get serious about giving the Palestinians a fair deal. That's what happens when you lose theater dominance. You end up having to negotiate.
Also, I'm sick of hearing the argument that Ahmajinidad is a madman and that as soon as he mints his first nuke he'll launch it and turn Tel Aviv to glass. That doesn't even make sense and would be the quickest way for him to turn 5000 years of Persian history into toilet paper. The Iranians aren't stupid. The Israeli response would be 200+ nukes reducing Iran to a post apocalyptic wasteland. Iran just needs that nuke for insurance. For deterrence.
And that's why Israel will have to decide pretty soon if it's going to attack. Because theater equalization dawns the second the Iranians detonate their first underground nuke.
I'll talk about the juicy Israeli attack in part II.
By War Tard at November 06, 2010