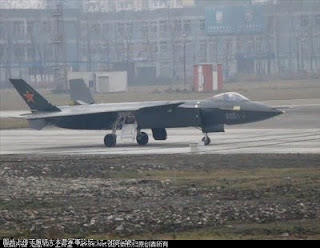 I suppose everyone has already noticed the 'leaked' pictures of China's new J-20 stealth fighter. First off, there's no such thing as a 'leak' in China. Secondly, that thing looks pretty shitty, like a real stealth fighter that ate too many cheeseburgers. It's a bit too big to be a fighter. Seems, at the very least, to be a fighter bomber or some kind of multi role craft. Possibly built for long range. Also, with those traditional engine nozzles, the heat signature on that thing would be way too high for it to be in any way stealthy.  At best, this aircraft reveals what the Chinese are aiming for. Something that could fly to Taiwan, loiter for hours over the battlefield engaging both air and ground targets and fly back without the need for lumbering mid air refuelling. Or, maybe, something that could fly far out into  'blue water' in the Pacific to harass a USN carrier group? Judging from the leaked images though, the Chinese are still years away from having anything stealthy enough to achieve these goals.


And then there's the other new toy that the US media began reporting on this week. China's new Anti Ship Ballistic Missile, the Dong Feng-21D. Yeah, that's D for Dong right up a USN carrier's tailpipe. If this system works, and preliminary testing hints that it does, then it's a pretty serious piece of fuck you to the US Navy. Launched from land based launchers and travelling at Mach 5 or more (high hypersonic) and with a range of 2000 miles, the DF-21D will be aimed and guided to blue water targets by Chinese satellites. Even the USN War College has admitted that if this system is fully operational it pretty much takes US naval dominance off the table for the first time since World War II.

Fun thing is, since this Dong is satellite guided, I don't see any scenario where the US and China start a shooting war (mid 2020s at least when the resources wars get started in earnest) where there isn't an initial flurry of space wars where each side takes out each other's satellites. Currently, the US is way ahead on this score and once this DF 21D has lost satellite guidance, it's blind. So much for hitting a carrier group that is sure to loiter in blue water. Not to say this missile isn't an advance and that carriers are not already obselete but watch the space war to see who's really winning the global arms race.

All this makes the US media shit their pants. I saw some Fox News blonde this morning reading the teleprompter talking points and floating the idea that the Chinese had 'stolen' the plans for their stealth fighter from the US by 'hacking'. Whatever that means. She had this expression of confused marvel on her pretty little face like she was trying to come to grips with how the slants could ever be so clever as to challenge the good old US of A. It's also patently absurd considering these Chinese planes are not in the same league as the US F-22 or F-35s. Yet.

My first thoughts on this whole new Chinese weapon thing was that it was a ploy planted in the US media by sleazy defense contractors now that the Republicans have taken over the House and have their fingers on the purse strings again. That big bad military industrial complex is still pissed that defense secretary Gates cancelled an order of F-22 raptors last year and limited the stealth fighter force to 187 planes. At $361 million a pop that seemed like a pretty wise move when you consider the state of the US economy and when you take into account the nature of today's asymmetric warfare that the US is engaged in. But those greedy slimeball corporate fucks could care less about the overall economy. It's all about the flow of taxpayer money into their coffers and now that there are  a new bunch of bought and paid for politicians reshuffled into office, it's time to scream OMFG China! Look at all their new shit! Give us more monies!
But lets face it, China is rising. The US is still way ahead by most metrics and it might take twenty years, but the trend lines are there and that makes the old fart white guys who run the US go crazy. From China's point of view it's perfectly rational to up military spending these days. Especially with all the money they've got to throw around. If you've got money to spend on empty cities like Ordos you might as well have an aircraft carrier and stealth fighters right? When your chief rival in the geopolitical chessgame is spending more on defense than the next 10 countries combined, it makes sense to have some nice guns too. The Dong missile is a device aimed at containing the US Navy. But the J-20 stealth fighter is a weapon designed to bring it to the enemy. Which is an interesting political message ahead of upcoming talks between Obama and the visiting Chinese President Hu Jintao.
When you take history into account, it is interesting to note that the Chinese have always been on the cutting edge of military tech. Gunpowder anyone? They did fall behind the Europeans in the 18th and 19th centuries but that was pretty much an historical anomaly in 4000 years of Chinese history. I have always wondered how the Roman legions would have faired in a hypothetical battle against an army of Han dynasty Chinese running off the Sun Tzu playbook.
Did China make this stealth plane all by themselves? No way. They are still dependant on the Russians for engine technology (the Russkis have always been amazing engineers) and there is some evidence of espionage but the fundamentals of stealth technology are pretty much well known these days. Fuselage design is just one part of it. You've also got to be able to have low emission targeting systems and engine nozzles that limit heat signature. The Chinese jet doesn't have these so it's pretty much a dick waving message to the US media at this point.
At first it had just taxied out onto a runway, shown off its pair of all-moving tailfins and Russian style engine nozzles, had photographers take its picture and then gone back inside its hangar like a Chinese hooker who came out from behind a curtain, flashed her tits and left without delivering on the blow job. The J-20 was apparently test flown yesterday just as US Defense Secretary Gates touched down in China. It did some circuits of the airfield so the photographers could snap some cool pics through the smog. However, much like a Chinese gymnast, she won't be legal operational until at least 2016. If even. Still, the sight of China's new toys prompted Gates to say that “China's investments in anti-ship weaponry and ballistic missiles could threaten America’s primary way to project power and help allies in the Pacific -- particularly our forward bases and carrier strike groups.”
Well no shit Sherlock.

Isn't that the whole point?


You can just make out the maiden flight through the air pollution
By War Tard at January 07, 2011