Egypt: The loss of Suez and the West's pet dictator to 'democracy'. What comes next? 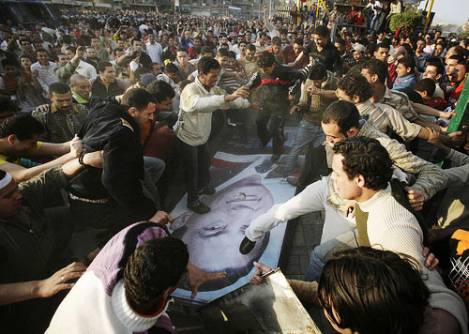 No sooner had the virtual ink dried on my post concerning Tunisia last week and here we are a week later with all hell breaking loose in Egypt. Grab the popcorn and crack open a beer my friends. Shit's about to get real interesting in the Middle East. If Western interests lose their pocket dictator Mubarak to 'democracy' that could leave Suez in "the peoples" hands and that's what will have the major elites shitting their collective pants in boardrooms all across the world.  Democracy is always liable to land you with unpredictable results. And none more so than in Egypt.
Oil jumped 4% on Friday on fears that the one million barrels that pass through Suez every day might get disrupted. Oil could go way higher if this revolt puts the Islamic Brotherhood in power and they decide to leverage the canal to mess with the US and Europe. Seven percent of all the world's goods pass through there every day too. Right now it's only costing the US and other foreign donors two billionish a year to help Mubarak subjugate the populace, keep Suez open and have Egypt not mess with Israel. That's bargain basement prices really for what they're getting in return. The fear now is that that bill is going to rise exponentially.
The corporate oligarchy that runs the US pushed Obama in front of the cameras on Friday and made him say he 'hopes the protests remain peaceful'. I sprayed beer all over my keyboard. When did peaceful protest ever change anything in human history? Sure, there are isolated aberrations. But let's face it, human history is a history of war, a history of who killed who to take their shit, not who asked nicely for some one's shit and was told politely to fuck off. History says that if the other guy has something you want the only way to have it yourself is by taking it; with rocks, arrows, bullets or stealth bombers. That's just how things happen to work on this planet. From a hypothetical alien's point of view, we're scary and primitive upright apes that enlightened intergalactic travellers would be well advised to steer clear of. Sad really, but true.
The Egyptian situation is difficult for the Western media to package.


You can see that confusion on the American cable news networks. It's hard to craft a message the plebs will understand without sounding contradictory. Or making the West look bad. Mubarak is America's paid dictator, a point subtly glossed over, yet they insist on referring to Egypt as a 'democracy' in the Arab world. That's prime doublethink right there. But as you watch those brave Egyptians taking on the security forces the average western person on his couch is rooting for them. At the same time, the corporate oligarchy providing the video feed is dying a little on the inside. The fear for them is that a new Egyptian 'democracy' is going to land us with Iran part II. The Muslim Brotherhood is democratically elected, just like Hamas in Gaza and Ahmajinidad in Iran (LOL). Either way, the thought of Suez in the hands of right wing fanatical Islamists is frightening to the elites. The canal is fundamental to rapid deployment of US naval strategy in the Gulf.

I heard some Fox News blond report earlier that officials at the Pentagon were watching events closely on the cable channels and especially on Al Jazeera. I sprayed more beer on my keyboard. Did America's premiere corporate agenda network just admit that its generals have to go outside American cable news (which is basically a "feeding interference to the proles" operation) to know what's going on in the world? As I'm typing, I just heard Sean Hannity say that after events in Egypt on Friday, he believes the only democracy left in the Arab world right now is in Iraq. OK, that's it!
Now I need a whole new keyboard!
So who is this Hosni Mubarak that the West seems to tolerate so much?

He became el presidente after some Egyptian generals gunned down Sadat for making peace with Israel in 1981. That's a twenty nine year stretch, the longest of any Egyptian leader if you leave out the pharaohs. He's a sleazy character fitting the profile of the groomed dictator. In Gulf War I, the West needed a few Arab nations to join the party to make it look like an 'international' effort on paper. Mubarak was happy to oblige in return for $20 billion in forgiven debt. The math of that worked out at half a million per Egyptian soldier deployed. That's a serious dick waving deal if you can get it.
Mubarak is corrupt. But not more so than any guy Western governments install or payoff to hold onto power in vassal states with strategic interests. It's hard to believe but Egypt has been operating under "Emergency Law" since 1967. This allows the cops to basically do anything they want without warrant. Censorship is everywhere and all Egyptian TV channels and newspapers are under Mubarak's central control. The government can chuck you in prison if they don't like the cut of your jib and leave you there without trial for years. There are at least 30,000 people locked up for no reason other than Mubarak doesn't like them. A lot of them are Islamic Brotherhood members and potential opposition leaders. When the token criticism comes from the West (hey dude, you're making us look bad), Mubarak just shrugs his shoulders and reminds them if he didn't do the West's dirty work for them, they'd end up with the Muslim Brotherhood running the canal. How would they like them apples?
He basically uses the Muslim Brotherhood as a bogeyman against his own populace and against the US. "It's me, and I know I'm bad but those guys over there, they are far worse. You choose." This line of reasoning is what has kept Mubarak in power for 29 years. What he didn't account for was the explosive growth of Arab satellite news networks and the ease at which they can be received. Every ramshackle mud hut in the Middle East has a satellite dish poking out of it somewhere. But the biggest elephant in the room is the Internet. It truly is coming into its own today as a paradigm shifting force. In fact, if you're a member of the ruling elite, it's becoming downright dangerous. The fact that Mubarak shut it down speaks volumes and is probably his 'bridge too far' moment. Just like the Allies trying to seize that final bridge at Arnhem in Market Garden. Mubarak has gone too far and I'm sure the engines are warming up on his private jet. His family have already fled. I wonder how much gold bullion they managed to fit into their suitcases?


At best, the Egyptians have a rational transition to some kind of representative government made up of secular and religious political parties. That's kind of a long shot. Polls there show 60% or more support for the banned Muslim Brotherhood. With 30% + unemployment and Egyptian pride bruised for thirty years under a Western supported dictator, you can see why they might vote in the West's worst nightmare as a form of cathartic vengeance.
That's the thing you've got to realize about the Egyptians. They regard themselves as the heart of the Arab world. The cultural center of Arab history, art, music and the rightful inheritors of the golden age of Arab history when the streets of Córdoba had public lighting and 500,000 inhabitants while the rest of Europe was in a Dark Age. These people have been kept down and they are not going to take it anymore.
Another concerned party in all this is Israel.


Egypt is the only Arab country to sign a peace deal with them. Public sentiment is not behind this deal. If Egyptian 'democracy' delivers the Muslim Brotherhood to power, Israel has got a new hostile neighbor on her southern border. You can expect Hamas to have a far easier time smuggling weapons and goods into Gaza and an emasculation of the Israeli blockade. I can't see the new Egyptian 'democracy' enforcing much border security with Gaza. Your move Israel.
Wow, it's been a whirlwind two weeks. What's next, Libya? Syria? Jordan?

One thing is for sure, I'm making another run to the store for more beer and popcorn.