Libya: The Dictator is dead! Next up: "Democracy"? 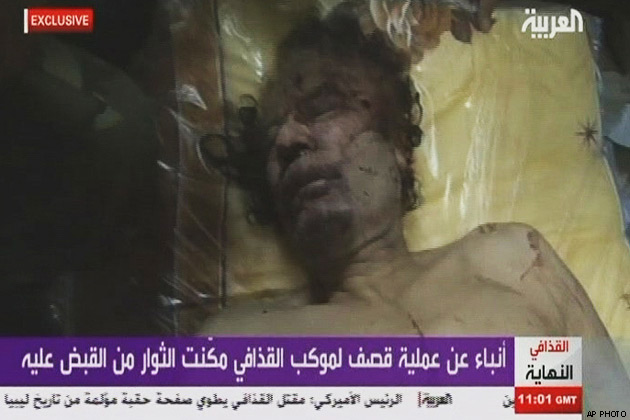 It was only a matter of time before Gaddafi ended up like Saddam Hussein.
Let's face it, it's risky business being a Mid East dictator these days. Unless of course you're a Saudi Royal and willing to do business with the global corporate oligarchy and play ball by petro dollar rules. Failure to comply means you get put on the bad guy list. And Gaddafi sure was a 'bad guy'. But then again, show me a leader in the Middle East that isn't. To climb your way to the top of the action in desert cultures, you've got to be a strongman. That means a sleazy history and high body counts the Western media can use against you when they decide they want your shit. No Mid East ruler since the time of Mohammad ever got to power on a peace and love manifesto. It's a hard dry land out there, forbidding, fruitless and it wasn't until the combustion engine got invented in the late 1800s that Western oligarchy's got interested in what was buried under all that desert sand.
Sure, Gaddafi had it coming.
He died by the sword just like in the old maxim.
I was never a fan  but I will admit a certain schadenfreude at Gaddafi's power to piss off oil hungry Western interests. Just when he was playing nice again and making friends with the US via Condoleeza Rice, he suddenly found himself cast as the lead villain in a NATO funded war movie called "Odyssey Dawn". He sure looked the part. Villains are always more memorable if they have a signature look and Gaddafi sure did fit the bill. He dressed in flamboyant carpets and habitually wore something that looked like the curtains from a 1970's porno flick. He had odd habits too like bringing his tent with him when travelling abroad and pitching it on the lawns of rented multi million dollar mansions while leaving the mansion itself unoccupied. My favorite bit was the hot Ukrainian nurses he had on  payroll  that "monitored his blood pressure" while he shelled his own cities. In hindsight, the city of Misrata turned out to be Gaddafi's mini Stalingrad and the place where his forces were broken.

Gaddafi grabbed power in Libya as a 27 year old captain in a bloodless coup in 1969 while the former King was jetsetting around Europe. Fancying himself as the Arab Che Guevara, Gadaffi was the strongman material the disparate Libyan tribes could understand and he set up the new Libya as a late sixties counter cultural anti imperialist mecca where anyone looking to do bad shit to Western interests could get supplies, weapons and explosives.
Obviously, that put him on the Western shit list.


Libya took part in the 1973 oil embargo against the US and its support for Arab unity and opposition to western interests in Islamic states painted a big fat target on Gaddafi in the western world. In 1982, Reagan imposed sanctions and the CIA tried to off him in 1984. Two years later, a squadron of F-111s bombed his compound and killed his 15 month old adopted daughter. This was in response to the 1986 Berlin discotheque bombing that killed and injured a bunch of US servicemen. The Libyan's retaliated in 1988 with the bombing of Pan Am 103 over Lockerbie, Scotland. The evidence that Gaddafi funded it was remarkably flimsy but it's gone down in history as his doing and conspiracy theories are not my forte. Truth is, everything is a conspiracy these days and whatever line of bullshit you choose to believe is a personal affair. There is no real truth anymore in the age of the Internet.
Let's face it, we're living in Bladerunner.
So what now for Libya after the national strongman has ended up on display in a freezer at the local supermarket?
Can these rebels, now styled the National Transitional Council, keep a lid on things or are 42 year old internecine scores about to get settled? Who really knows? That's probably why the NATO pencil pushers nicknamed this mission "Odyssey Dawn"; they had no clue either what the outcome of intervening in another oil rich Mid East dictatorship would be. I bet all those people dying in the popular revolt going on in Syria right now are kicking themselves that their geography doesn't sit on top of some proven oil reserves. The world we're living in demands energy and a fortunate geography buys you air support as the 21st century enters the proxy war stage. Libya was just the preliminary low hanging fruit.
There will be a lot of factors at work in Libya once the post revolution high wears off.
The Transnational Council are the ones sitting on the oil reserves and the ones the oligarchy is willing to do business with. All of those reserves are in Eastern Libya. And the TNC have already proved they can do business, filling a number of tankers even during the war that bagged them $200 million per load that sure helped fuel the rebel war effort.  Ironically, it was Reagan's sanctions and the inability of Gaddafi to sell his oil during the 80s and 90s, (when oil was astoundingly cheap), that preserved Libya's supply. Estimates say Libya had about 55 giga barrels of which they've gone through about half. This leaves them with significant reserves of around the 30 Gb mark and an export capacity of 1.9 million barrels per day which is why the western oligarchy got interested in this little war in the first place. 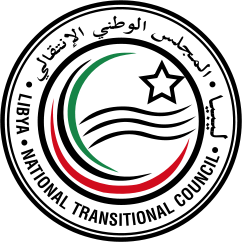 Eastern Libya and its capital Benghazi have always been Libyan redneck country and the part sophisticates in Tripoli liked to look down on while sipping their fancy coffees in upscale cafes. Benghazi is the city where the supporters of the former king that Gaddafi deposed in the '60s got to lay low while watching as Gaddafi funneled the oil wealth out from under their feet. They've been itching for a shot at revenge for decades. It's also home to the Islamists and the wilder desert tribes and proved fervent recruiting ground for volunteers for Iraq and Afghanistan to fight the Yankee imperialists. Those are the contradictory people NATO sided with when they got involved in this war. Truth is, oil makes everyone a consumer, loyalties cheap and alliances tend to shift like desert sands all so long as us proles get to fill up our vehicles as cheaply as possible to make that commute from surburbia to the job site affordable.
Libya, under Gaddafi, supplied 10% of the Euros oil (the reason why the French and British got concerned for [sic] humanitarian reasons) and one thing about Libyan oil is that it is especially 'sweet'. That means it only costs a dollar to refine a barrel as opposed to most other oils out there (barring Brent North Sea crude) with high sulphur content. Those Canadian tar sands the US is in love with right now are dirty and the pipeline they want to run to Texas means the US is really starting to get jittery about the future of suburban voters. If shit gets too expensive that voting block might finally go 'off reservation' and elect a guy the corporate fucks have not already bought. 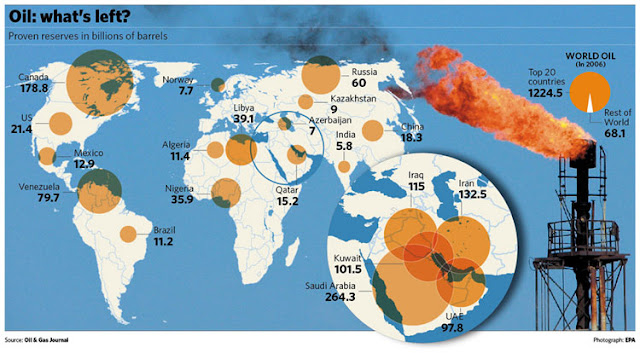 Yeah, Libya sure was a fun war to watch, if you're like me with an eye on the bigger picture. The bigger picture is nasty and Libya and Gaddafi will be merely a footnote in the ongoing global chess game. The energy chess game that pits established powers against rising powers all of them sucking at the tit of black gold. Sure, there are conflicting reports on how much spice is left. But that doesn't really matter in the end anyway.
As always in war, what really matters for nobodies like you and me, is what other men in positions of power are prepared to do to deliver what the rest of us secretly want. Cash money. That's how power structures work. You stay in power playing a subtle strategic game of pleb delivery and filling your own pockets for retirement on beachfront property somewhere sunny. And killing your opponents if they become too pesky. Machiavelli layed down the rules for this whole paradigm centuries ago. And nothing has changed for us sad upright apes.
And by Machiavelli's own measure, it seems Gaddafi screwed up royally and finally ran up against more powerful foreign men.
By War Tard at October 22, 2011