Obviously, I am working on an article on the origin, lead up and implications of this war. But for now, I'll just give some updates on what is likely happening. Due to the Fog of War, mass propaganda in Western nations and by Russia itself, it is impossible to verify most information. However, there is no doubt that Russia will win this war, the only question is how much resistance the Ukrainians are prepared to mount. Russia is targeting military installations at the moment, has achieved air superiority and the attack is not limited to the Donbass but Kiev also (which means everything east of the Dnieper but possibly all of Ukraine.

It is quite clear that NATO will do nothing militarily to stop this.

The following assessment is by Strelkov Igor Ivanovich, who is a Russian Army artillery officer who has fought in Ukraine and is an expert. Obviously. This information is to be taken with a grain of salt.  (Italics are mine)

1) Southern Offensive: Russian Armed Forces launched an offensive north from the Crimean isthmuses, supporting it with a naval landing near Genichesk and tactical helicopter landings on Kherson and Novaya Kakhovka. The AFU front collapsed and allowed the Russians to break through into open ground, reaching the lower course of the river Dnieper. (This would be a significant advance, but I would be amazed if the Russians had made the crossing as shown in the map) The river crossing has been reached and bridgeheads have been created on the east bank for further advancement Attempts by Ukrainian General Ukrov to rally troops and create a front were thwarted by air strikes. By nightfall. Russian troops reached outskirts of Melitopol from the south (probable).

It seems the main strike groups at night and tomorrow will continue their offensive along both banks of the Dnieper to the north - to Zapororzhye and Dnepropetrovsk and also thrust westerly - to Nikolaev and in the northeast - the rear of the Ukrainian army defending the Donbass. (This all sounds perfectly reasonable as far as Russian planning goes. The main Ukrainian force of 60,000 men is located here and encirclement may lead to a quick surrender and less loss of life. Again, get out your saltshaker) 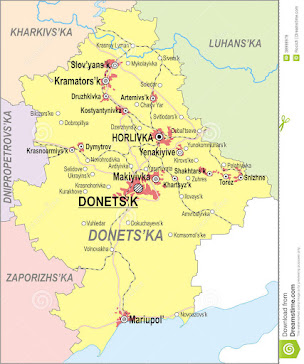 2) Donetsk Frontal attack: The fighting here is "emphatically "chilling" in nature. (I presume this is a Russian's way of saying that the Ukrainians are putting up stiff resistance and inflicting casualties on the Russians here.) A limited offensive on Volnovakha is designed to pose a threat to Mariupol (in fact, its capture now has no strategic significance, since it will almost certainly surrender when troops from the 1st theater reach Berdyansk and Zaporozhye (speculation), but more importantly, a breakthrough here will allow a rapid advance to link up with the Crimean forces rapidly advancing from the west. This threat will prevent the Ukrainian forces from releasing troops that would otherwise be thrown at the advancing "Crimean front". (This is logical but again, impossible to confirm if these Russian objectives are being achieved. However, it does indicate that the Russians do intend encirclement of the main Ukrainian Army and cutting it off from Kiev.)

Similarly, attacks from the territory of Luhansk to the north (through the Seversky Donets), which have no strategic prospects look the same, their task is to bind the Ukrainian Forces and prevent them from being sent north to blockade and defend Kharkov. (Kharkov being a major Russian speaking city and the site a a very bloody battle v the Germans in WWII. This also confirms the Russians, if we didn't already know it, to take everything east of the Dnieper) And also to detain them until the "big cauldron" to the west closes somewhere in the Dnepropetrovsk area. According to the fierceness of the fighting and losses, this is the bloodiest direction right now (this is undoubtedly an admission of significant losses on both sides) since the enemy is defending a deep-echeloned and fortified strip where its most combat ready and experienced units are located (another admission of probable significant Russian casualties). Tomorrow, the fighting will continue with the main task: not to all the enemy to remove or transfer and unit to the west (i.e. thus preventing encirclement).

3) The third strategic theater: the front from the northern part of the LPR to the Chernihiv region. The greatest success was achieved in what was assumed to be the least promising theater, the northern sector, where the Ukrainian Army either did not intend to defend at all or had insufficient forces. Sumy, Konotop, almost the entire Sumy region have been taken with no resistance. There is some progress in the Chernihiv region. It is assumed the Ukrainian Army will put up stiff resistance with "chilling battles" here (another tacit admission the Russians are experiencing difficulty here which is logical as this would delay any advance on the capital Kiev).

The main reserves are concentrated here. At the same time, the deeper Russian troops advance, the stubbornly resistance around Kharkov falls into "operational shadow" (an interesting term), which was expecting a strike and is well equipped with well-trained troops. In turn, Russian Federation troops cannot advance and leave Kharkov and Chuguev not taken to the rear (an honest admission) both for logistical reasons and "left alone" Ukrainian troops may try to deliver counter strikes to the flank and rear of the units advancing on Kiev and may even strike into Russia itself which does not pose any military danger but is unacceptable for political reasons. (I find this a remarkable admission and makes the account all the more plausible strategic wise although all gains are to be again treated as "possible" only). Therefore, fierce battles will continue tomorrow in the Kharkov Region with the aim of speedy capture of the city. (I find it highly optimistic for the Russians to capture a city the size of Kharkov if it has significant Ukrainian troops entrenched in the city. This is where I could see a large civilian body count although the Russians will be reluctant to bomb it or use artillery on a city that was Russian 31 years ago and is full of ethnic Russians)

In further news it is generally being reported by mainstream news that the Russians have captured Chernobyl (lol) and Pripyat which must be like a game of Stalker. Pripyat two has been taken. The significance of this besides the radiation is that puts a medium sized force 100 miles north of Kiev. All airports have been bombed or been subject to missile attack.

One thing I cannot confirm as of this writing is the airborne assault on Kiev airport. It seems like it was attempted but is a tough hold for light infantry. Both sides are claiming victory here, so the truth is somewhere in the middle. If the Russians have made the gains as depicted in map 1, then much will depend on the speed and availability of pushing in reserves which will be needed to secure the territory captured.

It seems the Russians are playing a somewhat risky gambit here which involves encircling the main Ukrainian army fronted at Luhansk and Donetsk and capturing Kiev (a huge psychological target for both sides). The Russians are counting on a capture of Kiev resulting in mass surrender of the Ukranian troops. The Azov divisions probably will not surrender as if they are captured the Russians will probably mass execute them (de Nazification) as Putin put it in his speech just two days ago.

This is certainly the most interesting war in my lifetime but most definitely, this war is a decisive turn in the global order and sets a new course for the 21st century.