The London Student Riots were a masterclass in ancient warfare! 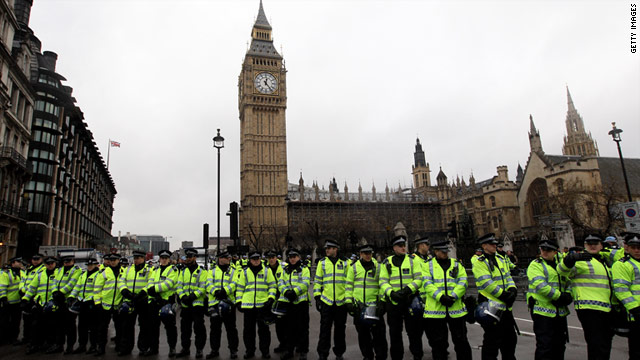 I was watching the London Student riots yesterday, absently at first, the TV flickering in the background while I surfed naked chicks when something about the mayhem caught my attention. It was an aerial shot where the front line of the demonstration battle was distinct because the cops were wearing bright lime green jackets as opposed to the motley blue grey mass of students. Something triggered. Holy shit, that looks like the front line of a battle like Pharsalus or better yet (given the closed terrain) Thermopylae. I unmuted the TV and ran to the kitchen for popcorn.
There was, after all, a war on.
Soon after I found myself glued to the TV, witnessing simulated ancient warfare complete with motherfucking cavalry. I shall repeat that... motherfucking cavalry! Obviously they were nerfed but still, it's a battle in 2010 that includes charging horses! It was like paintball for people like me who never go outside. You get to see ancient battle play out like it would have, kind of, (I know it's a stretch but stay with me here for a sec) and nobody gets seriously hurt. Just like paintball.
The cop troops were well equipped, well disciplined, like the Macedonian phalanx or one of Caesars legions, using the Roman formation of tight adjoining shields and slashing with batons, which were like nerfed versions of the Roman Gladius short sword. You'll notice in the clip coming up how a disciplined line of shields combined with stabbing actions can cause mass casualties to the enemy, especially when they're unruly and undisciplined (I'm thinking Gauls) and pressing forward from the rear.
The cop force were outfitted with helmets with transparent face guards (a modern innovation I bet the Romans would have sold their sisters into slavery for) and had some pitched defensive fences which were soon converted to artillery by the beserking student force.
The student army was composed almost entirely of light infantry which had the advantage of high mobility but offered little in the way of armor protection. I did notice a few veteran troops students who'd been at the previous riot and had brought along some homemade shields which they put to good use in some of the YouTube skirmishes we'll see in a few moments. The Student Force reminded me of Gauls or maybe one of the Germanic Tribes  of the first century AD, fighting with enthusiasm but little cohesion. They did deploy to good effect a lot of missile skirmishers equipped with paint bombs, bottles, and bits of smashed up fence.
Okay, I'll pull out the hand lotion. It's time for the fun stuff.
In this first vid notice the cop line and the steady efforts of the lightly armed student forces trying to poke holes in the cop line. You can see here how effective a row of massed shields is against a bunch of angry people with no command structure. Other things to notice, paint bomb skirmishers, the weakness of cavalry when not charging forward en masse but surrounded by hostile infantry and under missile fire. Notice too the panicking horse that chucked his cop. Ouch, I felt that.
Fun no? Next up is the clip that makes me ﻿jizz. The cop infantry line splits open to allow the cavalry to charge through the middle. Not a tactic the ancients would have employed since cavalry is most useful when it flanks the main enemy body and pincers around from the rear. Obviously not possible in this terrain. Instead, the cop cavalry decides to go all Crécy on those bitches, charging pell mell through the middle and right into the student archers  stick and bottle throwers. Watch also how the students (accidently) pull that old trick the Macedonians used against Darius' chariots at Issus, allowing the cavalry to bubble into the main line and then pinching off the salient from the main body of cop infantry in a pincer movement. They then proceed to engulf it in missile fire, totally routing it. So much battlefield tactics on display here they should add it to the curriculum at West Point.
Another fun thing about this clip are the voices of the establishment commentators as they describe the battle as if the police are winning, their voices dying a little inside as the student army closes the cauldron and hammers the fuck out of the cop cavalry. Priceless.
﻿

They say in ancient warfare if you could capture the enemy king the main body of enemy troops  rout on seeing their leader vanquished. Alexander pulled this move at Issus and made Darius flee the battlefield. Well, fuck me sideways, I nearly keeled over when the student army nearly pulled off the same ballsy move and captured Prince Charles.

I love the guy screaming 'roll the window up' at the end. Top comment on YouTube is, "Window up? Pull it down and let the shit fly in their faces. Up the Student Revolution!" Makes me giggle. Because if the real revolution were ever to come, the weapons won't be nerfed and just like in all of history, the kings will have all the big guns.﻿
By War Tard at December 10, 2010